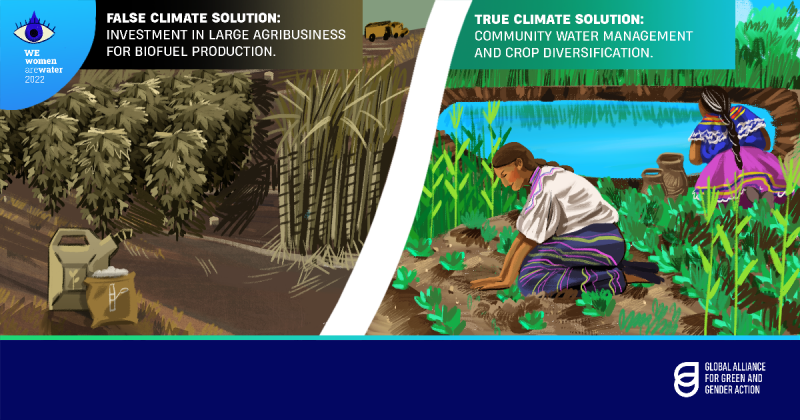 Long story short:  International financial institutions such as the Inter-American Development Bank continue to invest in the false climate solution of biofuel production, which has long been known to increase greenhouse gas emissions, compete with food production for land and water, and displace local communities. These institutions must shift their resources towards the true, gender-just climate solutions implemented by Maya Ch’orti’ women and their communities: community water management and crop diversification to adapt to climate change impacts.

The reality now: investment in large agribusiness for biofuel production

For 17 years the Mayan Ch’orti’ people have been asking for ownership of the lands where they and their ancestors lived for generations. Denying the Ch’orti’s titles to communal lands means depriving them of access to water and food security. One initiative that is depriving the Ch’orti’s of their land is the expansion of the monoculture crop jatropha, known locally as piñón, on their territory for the production of ethanol fuel. Large biofuel companies are monopolising water resources and displacing local communities from their lands.

Sugarcane, Jatropha and oil palm monoculture plantations in Guatemala are expanding in part to meet European demand for biofuel. Biodiesel made from these crops has long been identified as a promising renewable energy substitute for diesel fuel. However, researchers have been publishing studies for years proving that biofuels are not the easy climate solution that politicians and corporations have made them out to be. A study from 2007 Nobel prize-winning chemist Paul Crutzen found that growing and burning many biofuels raises rather than lowers greenhouse gas emissions, in addition to reports of biofuels threatening food supplies and farmers’ livelihoods.

Guatemala is the world’s fourth largest exporter of sugar globally and produces around 44% of Central America’s sugarcane ethanol. The United States and international lending institutions such as the World Bank, Inter-American Development Bank (IDB) and Central American Bank for Economic Integration have heavily invested in Guatemala’s production of this energy source. The Inter-American Development Bank said the industry could bring an infusion of cash and jobs to Guatemala’s rural economy if developed properly. They allotted US$150 million to finance “sugar and bioenergy companies and exporters” in Latin America, including in Guatemala.

Laws in the United States and Europe that mandated the increasing use of biofuel in cars contributed to spikes in food prices and a shortage of land for food-based agriculture in Asia, Africa and Latin America. This resulted in many industries turning to jatropha, a non-edible weed that grows in land less suitable to food crops and produces a high oil yield for a smaller amount of land. Researchers found that jatropha needs five times as much water per unit of energy as sugarcane and corn, and requires an average of 20,000 litres of water for every litre of biodiesel produced in Guatemala.

Even though the Ch’orti’ have been reclaiming territories, the government and farmers continue to violate their acquired rights to natural resources and livelihoods. Some municipalities have still refused to register lands in Indigenous communities’ names. In response, the Ch’orti’ women in 2019 proposed three ways forward: the implementation of a policy to reforest communal areas, mainly where the water sources are located; the creation of reservoirs to guarantee families water access; and continued actions before the courts of justice that legitimise the rights of Indigenous communities and hold accountable thoses who are responsible for the environmental damage in Indigenous territories.

In one community, after the municipal mayor dried up a nearby lagoon, Indigenous families dependent on the lagoon were forced to collect and carry water located one kilometre away from their homes. With the support of COMUNDICH, the community built a reservoir to store their water.

Climate change and the accelerated destruction of the local ecosystem have all impacted the availability of water and livelihoods of the Ch’orti’ community who are dependent on agriculture. Their main crops of beans and corn are vulnerable to the frequent droughts caused by climate change, and during the pandemic many people’s crops failed, causing them to survive solely on corn and some basic grains.

With the water from their reservoir, the community has been able to diversify their crops and plant native species that better adapt to the environment. This crop diversification has improved their diet and optimised the use of their land. These gardens have also helped families to cope with food shortages during the pandemic, and they are now planning to construct a new reservoir that would benefit more than 40 families in this community, especially during times of drought.

Today, Ch’orti’ women continue to put their ancestral knowledge on conserving and protecting water into practice, and pursue legal actions that will grant them their proper land rights and guarantee access to their water sources.

The network of Indigenous Mayan Ch’orti’ women and COMUNDICH are supported by Fondo Tierra Viva, which is part of the GAGGA network. You can follow the work of COMUNDICH here and listen to them below.