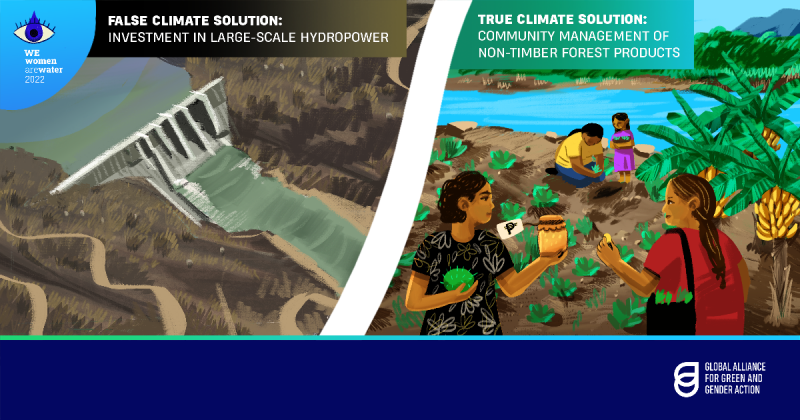 Long story short: The governments of China and the Philippines are building a “climate resilient” dam that will displace the Indigenous Dumagat-Remontado people and affect their way of life, while emitting significant amounts of greenhouse gases. Institutions investing in dams would do better to shift their resources towards the true, gender-just climate solution implemented by the Dumagat women and their communities: community management of non-timber forest products.

The Dumagat-Remontado Indigenous group has ancestral domain claims in one of the most biodiverse and largest remaining tracts of rainforest in the Philippines. It is in this area of the Sierra Madre mountain range where the national government plans to build a “climate resilient” dam to supply water to Metro Manila and nearby urban areas. The Kaliwa Dam is part of the New Centennial Water Source (NCWS), a project President Rodrigo Duterte secured with a $235.9 million loan from the Export-Import Bank of China under Duterte’s “Build, Build, Build” programme and China’s “Belt and Road Initiative.” According to the government, the project is based on comprehensive studies conducted by the World Bank and the Japan International Cooperation Agency.

The Philippines continuously ranks high among countries most affected by climate change and climate change has increased the frequency and duration of water shortages in the country, including in Metro Manila. The Kaliwa Dam project is Duterte’s response to this water insecurity but the Dumagat people, including the largest federation of Indigenous women in the area called Samahan ng mga Kababaihang Dumagat ng Sierra Madre (K-Gat), are calling for the government to look for other solutions that do not violate their rights.

The construction of the Kaliwa Dam will displace 300 Dumagat-Remontado people and submerge 113 hectares of forests which are a source of livelihoods and where the communities source their drinking water, food and medicines. Impact assessments conducted by both the Philippines’ environment department and independent groups show that it will also submerge 12 of their sacred sites, endanger endemic wildlife and plants, drive massive species migration, and put not only upland Indigenous communities at risk but also lowland agricultural and fishing communities with a history of flash flooding.

The construction of the dam will prevent the natural flow of the river and therefore affect the river’s ability to trap carbon. While large dam reservoirs are portrayed as a climate solution because they reduce reliance on fossil fuels, and as a way to alleviate water shortages, they are actually a globally significant source of the greenhouse gas methane. According to a study that analysed more than 250 dams, researchers found that rotting vegetation like trees and grasses submerged by dam reservoirs emit about a billion tonnes of greenhouse gases every year.

The women of the Dumagat community are actively involved in the sustainable planting, harvesting, processing and marketing of non-timber forest products (NTFPs) like honey, rattan, forest food and resin from the endangered Almaciga tree. The Kaliwa Dam project would destroy these products that the community is so dependent on for their livelihoods, food, fuel, medicine and income security, and even for keeping traditional knowledge alive.

Women tend to have greater access and control over NTFPs that can be collected easily.  However, traditionally women do not have control over the income from NTFP sales, and their access to formal or distant markets is limited due to social norms that restrict their mobility. This changed during the pandemic when residents in Metro Manila no longer had access to markets due to the lockdown. The women of K-Gat seized on this opportunity to sell NTFPs from their ancestral domain and fellow Dumagats’ farmlands to Metro Manila consumers at a time when earning an income was difficult. Despite some community members’ lack of belief in K-Gat’s idea because the group was made up of ‘merely women,’ K-Gat pulled off the initiative and is now planning on forming a cooperative to ensure sustainable and fair trade of its products.

The Kaliwa Dam project would disrupt the Dumagat women’s ability to do this. Selling NTFPs provides a diversified source of income for the community, which increases their ability to adapt and respond to climatic shocks as their income doesn’t depend on a single species or crop. Increasing the variety of foods contributes to the food sovereignty of the community.  NTFPs can also  indirectly contribute to carbon capture through forest conservation – the production of honey, forest food and rattan requires functioning forests, thus they represent incentives to protect forest systems and avoid deforestation.

By playing an important role in forest conservation, NTFPs contribute to improving the water quality and availability in the area. Healthy forests act as filters to keep pollution out of the water and control the water cycle by regulating precipitation and evaporation. The Dumagats, whose culture is closely tied to their free-flowing rivers, rely on this water for their food and livelihoods on a daily basis. They use traditional spearfishing, avoid using chemicals and pesticides, and maintain the trees along the riverbanks so they can ensure the next generation has access to these rivers. Finding a solution to water scarcity in Metro Manila and in the Philippines as a whole is critical, but it cannot come at the expense of the livelihoods, traditions, knowledge and practices crucial to the survival of Indigenous and local communities.

In 2019 women leaders from three Dumagat ancestral domains in the Southern Sierra Madre organised the largest federation of Indigenous women in the area, with the assistance of Both ENDS and GAGGA partner Non-Timber Forest Products – Exchange Programme (NTFP-EP) Philippines. K-Gat is engaged in advocacy work on Indigenous people and women’s rights, the protection of their ancestral domain and environment, and the development of livelihoods for Indigenous women. It works with a network of Indigenous and civil society organisations opposing the construction of the Kaliwa Dam. You can find out more at the following links: