Global warming is violence against women 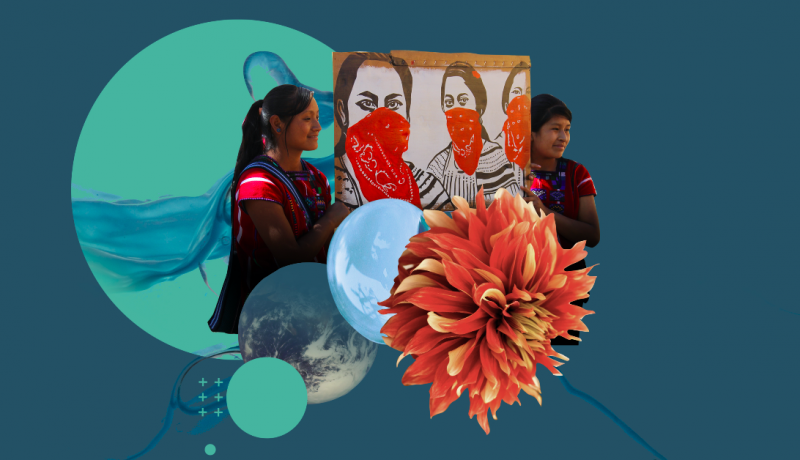 In just one hundred years, industrialization, consumerism, individualism, depredation, looting, and violence have changed the climate like never before in the history of the planet. And even though the less industrialized countries do not contribute to greenhouse gas emissions as much as the more industrialized ones, structurally excluded peoples bear the brunt of the impacts of climate change, especially Indigenous, Afro-descendant, migrant, and marginalized urban women and girls in the Global South.

This reality calls us to strive for environmental and climate justice, which are inextricably linked with gender justice. Due to entrenched social and gender inequalities, women who live on the outskirts of large cities or in rural communities are often the most affected by water and soil pollution, excess garbage, floods, hurricanes and storms, prolonged droughts, heat waves, the loss of animal species and ecosystems, new pandemics, and the spread of disease.

We know this firsthand as an ecofeminist organization that works with women in southern Mexico. In the twelve years since our founding, Agua y Vida: Mujeres, Derechos y Ambiente (Water and Life: Women, Rights, and the Environment) has trained and provided information to over 700,000 women to support them in their struggle for the defense of their environmental rights. We have achieved this through initiatives such as workshops, training programs, advocacy campaigns, film screenings, forums, and meetings. We have also raised awareness about the work carried out by organized women to protect their territories, water, land, seeds, and ancestral knowledge despite repeated instances of exclusion and verbal and physical violence. Women on the ground are developing concrete actions in favor of environmental and climate justice.

When Hurricane Eta hit Chiapas in November 2020, the women’s groups we accompanied — which had organized to carry out actions such as soil restoration, reforestation, organic gardens, and chicken farms for their own consumption, among others — lost everything to the rains.

Therefore, when women of color talk of global warming, we are talking about our lives and our experiences with exclusion, marginalization, and the various forms of structural violence that we feel in our  bodies — bodies that exist in territories that have been continuously plundered and colonized for more than 500 years. If companies do not scale back the kind of activities that make the planet warmer — such as mining, hydrocarbon extraction, intensive agriculture and livestock farming, and the petrochemical, automotive, and tourism industries—it will be impossible to limit global warming to 1.5 or 2 degrees Celsius, which will have catastrophic consequences for all of us and our planet.

Climate change as the result of colonialism, racism and patriarchy

The loss of crops due to droughts and floods gives rise to despair and hunger. It forces many families to sell or rent their land for extractive projects such as palm oil monocultures. The resulting frustration drives many men to alcoholism, which makes them more violent. From January to September 2021, Chiapas registered 2,873 cases of domestic violence, 365 cases of rape, and 38 femicides. Of the victims, 41.9% were domestic workers, many of whom were also migrants from Honduras, Guatemala, and El Salvador. In the face of environmental degradation, militarization, and violence, women often see migration as their only chance. A woman that participated in our Women and Megaprojects workshop had this to say:

“[Corporate and/or government representatives] promise that the megaprojects will bring development, progress, and jobs, but that’s a lie. The women mentioned the rise in violence. As our partners lose their jobs, they turn to alcohol and drugs. Violence increases, and migration increases. Husbands move away, and they leave behind their wives with the children. Eventually, [the women] migrate too.” — Participant at the Women and Megaprojects: Building Community Resistance workshop, June 2021

In Chiapas, many women’s groups are working to recover and restore their lands and territories. Indeed, they are developing concrete actions that contribute to environmental justice while living in communities with limited access to resources. This puts them at a higher risk of being affected by socio-environmental issues and conflicts. In their words:

“The megaprojects [that the government and the corporations] want to force on us and our lands will wipe out all of this. They are going to destroy the crops and our traditional medicine. That’s why I’m here, defending. Let’s defend everything we have in our territories.” — Participant at the Women and Megaprojects: Building Community Resistance gathering, June 2021

Likewise, their actions contribute to climate justice in the sense that it is often women, through their organizing and their labor, who are keeping their cultures alive and recovering their lands’ biodiversity by means of their ancestral knowledge. In this manner, women on the ground help mitigate the effects of climate change. In their words, here are some of the practices they employ:

“At the local level, we are implementing agroecological and poultry farming practices, [including] egg production, to support our families and eat healthier. We are using vermicompost [an organic fertilizer obtained from worms that is rich in nitrogen, potassium, phosphorus, and magnesium as well as minerals that boost soil restoration and nutrients] to manage the crops that supply our families, and we are organizing to supply ourselves with [drinking] water. We are carrying out solid waste and graywater [domestic wastewater without fecal contamination] management practices. We are constantly thinking about what we put in our mouths—for our own sake and for the sake of our children, our families, and our community. We are working on agreements to continue defending [our lands] and sharing practices to combat the extractivist model. In addition, we are strengthening our alliances with collectives and communities to continue in the struggle for our territories and to fight for our right to land. We are also organizing with small [agricultural] producers to sell clean, healthy food locally and regionally.” — Participant at the Women for Food Sovereignty, Health, and Defense of Territories: Weaving Alternatives to the Expansion of Palm Oil in the Southeast of Mexico gathering, March 2021

These testimonies reveal that climate decisions must take into account and integrate the knowledge of local women. Speaking plainly: Global warming will not stop as long as extractive practices exist. It can only be stopped if we organize and fight for environmental and climate justice at the local level, taking into account women’s words and their knowledge. It can only be stopped if we broaden our gaze beyond temperature measurements and toward the eyes of those who suffer most due to its effects.

Agua y Vida: Mujeres, Derechos y Ambiente is an ecofeminist organization that works with women in Chiapas, Oaxaca, and Tabasco, in southern Mexico. Their purpose is to develop actions aimed at strengthening the interdependence between women’s human rights and the rights to water, land, and the commons in order to promote social and environmental justice. They carry out their work through three interrelated programs: the Environmental Rights and Justice Program, the Body-to-Earth Territory Program, and the Domestic Work and Care Program. The strategies they employ are training, research, communication, linking and networking, and feminist activism. You can follow them on Facebook, Twitter and Instagram.

Above design is by Naandeyeah and photo is courtesy of Agua y Vida.