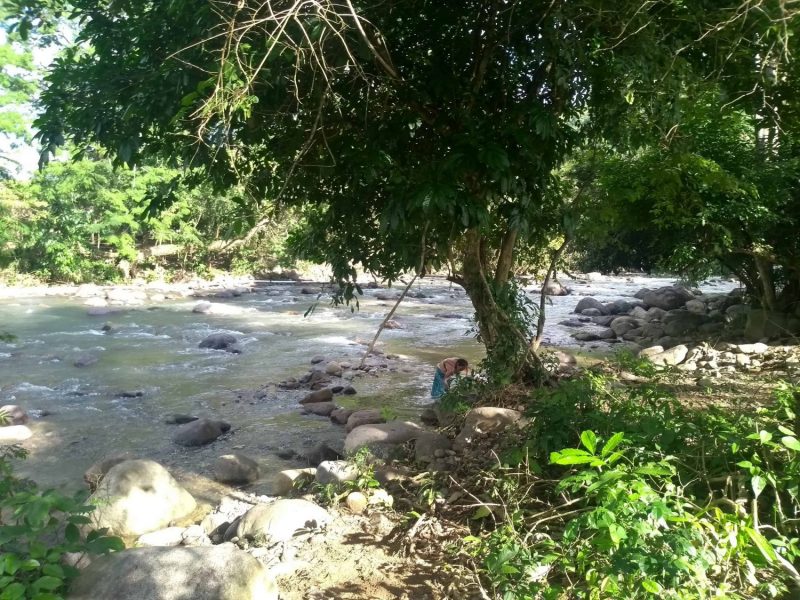 The environmental conflict in Bajo Aguán, Honduras, has been active for many years. Honduras is a country that has a vast reserve of natural resources, but the majority of these resources are in the hands of only three powerful landowners, leaving farmer families in poverty, without land, without work and without food.

To the problem of land ownership, we must add the mining concessions that the government has been giving to different businessmen of the Honduran elite since 2009, when the coup took place.

Violence has also been part of this conflict, given the social and political context in Honduras, considered to be one of the most violent countries in the world.

According to the report “Honduras Elites and Organized Crime: Introduction” created by the organization Insight Crime, this violence is caused by transnational criminal organizations, local drug trafficking groups, gangs, corrupt security forces and political leaders, all of which have a close relationship with the country’s elite.

Between all these actors, there is a network of collaboration that allows each of them to maintain their economic, political and territorial power—a relationship in which they always win, and the people always lose.

It is this collaboration that has allowed the natural resources of the Bajo Aguán area to be in the hands of only a few people, who use their influence and power to take away the lands of farmer families, in most cases through intimidation and violence.

Mining companies generate division within communities as a tactic to gain support among the local population, which allows mine owners to rely on some of them to defend their companies’ interests. This strategy leads to violence and clashes between those who are in favor and those who are against extractivism, and it includes death threats, judicial persecution or organized crime activity on behalf of the mine.

“Mining projects affect all of society. They affect areas that are suitable for crops by destroying the soils’ fertile layers, which precipitates a shortage of basic grains and a food crisis for the entire population. These activities cause epidemics, militarization, organized crime…” says Consuelo Castillo, who belongs to the Red de Mujeres Campesinas del Valle del Aguán (Network of Farmer Women from the Aguán Valley).

The biggest impact that women experience due to mining projects is the loss of their lands and employment opportunities. This causes other problems, such as forced migration to find ways to survive in other places.

They also suffer from limited access to water, environmental pollution, violations of their rights and those of their children, and cancer epidemics caused by chemical carcinogens used by the mining companies as well as other health issues.

Women in the spotlight

The Red de Mujeres Campesinas del Valle del Aguán works by organizing women human and environmental rights defenders, keeping a registry of incidents of violence towards women defenders, providing support to the victims of the mining companies and safeguarding the complaints’ due process. At the same time, through visits and meetings, they provide trainings and guidance to women in rural communities about the consequences of the extractive industry.

“We coordinate within rural communities as women and organize demonstrations in front of state institutions (which should be finding a solution to the conflict), summits, water forums, press conferences, public complaints locally and internationally and women’s rallies demanding the annulment of the laws created to favor the destruction of our planet,” states Consuelo.

Their struggle doesn’t go unnoticed, and therefore the women have become the targets of death threats, intimidation, verbal aggressions, defamation and smear campaigns, judicial processes, stigmatization and expropriations. Actions which, in some cases, have caused the forced displacement of women defenders for their own protection.

In the Honduran context, where persecution and harassment is a constant for human rights defenders, those in power are looking to silence whatever dissenting voice they consider a threat to their interests, and women environmental defenders fall neatly into that category. However, they are not alone; they are supported by a network of organizations that amplify their voices and strengthen their protection.

Despite all these obstacles, they still do not lose hope that their voices are being heard and that they can build a better world for everyone, because they know they’re fighting for life. “Fighting for the commons is fighting for everyone’s life. Defending the rivers is fundamental to preserve unpolluted water and to guarantee a healthy environment for all the lives in this universe,” concludes Consuelo.