The women of Aroroy fight to be heard 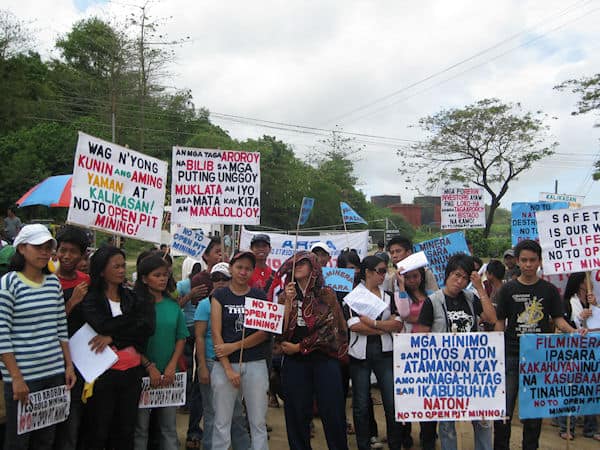 For the people of Aroroy, in the Masbate province 350km southeast of Manila in the Philippines, “to be sitting in a pot of gold”, is not a blessing. The province’s mineral wealth has not translated into better conditions for the communities in the region, consistently among the poorest regions of the country.

Filminera Resources Corporation is an open-pit mine covering a total of 10,807 hectares in the area. Residents living a few meters away from the residential areas and schools, are infected with various diseases. The affected communities are farmers, fishpond operators, fisher folks, residents and schools located in 15 Barangays (villages) in the region, with a total population of more than 25,000.

“The mortality in the community has increased especially in 8 impacted Barangays (close to the open-pit mine). Furthermore, Barangays near the mining area have been indirectly affected.  Before Filminera gold mining operation we only had few Tuberculosis patients, less than 1% of the population. But when the company started its mining operation in 2008 the mortality increased every year.  We suspect that the causes of the sickness are from the metallic dust”, says Mrs. Marilou Verano, a women leader working in Aroroy.

Mrs. Verano says she wrote a letter to the Ministry of Health in 2012, asking them to conduct a Health Assessment and Environmental Assessment, but they never responded. The villagers have also been affected with lung and skin diseases, dysentery, diarrhea, vomiting, and other diseases related to the lack of potable water.

Filminera Resources Corporation/Masbate Gold Project/B2Gold (Canadian Company) previously AIG (Australian Company), operates in the region using an Environmental Compliance Certificate (ECC) that was given to the company formerly known as Base Metals Minerals Resources Corporation on June 29, 1998, limiting the area of the mining activities to 443 hectares.

Today, Filminera is managing more than what the ECC originally established, and covers an area that directly affects bodies of water that are polluted already due to the mining activity, Mrs. Verano explains. These rivers and port represented the livelihood of many families in the nearby villages.

“Filminera impounded the water sources of Bangon River, Guinobatan River, Panique River for its mining operation more particularly in its gold processing plant which need a huge volume of fresh water to operate” says Mrs. Verano. This has directly affected the farmers and fishers of the area, as well as has impacted the forest and has polluted the ports and the water resources of the region.

Organizing for a better future

Mrs. Marissa Ledesma, mother of two children, used to gather shells in Port Barrera, and was making a daily income of 600 to 800 pesos (around 11 to 15 U.S. dollars), but when the water got too contaminated, shellfish started to disappear, and women like Marissa lost their way of livelihood.  Marissa and other women moved to Manila and Cebu to work as house helpers, leaving their small children in Aroroy, to provide for their families.

Now, around 300 women from 7 Barangays affected by the mining activities of Filminera have organized and legally established the Marian Women Producers Cooperative. The first attempt to build a multi-purpose cooperative was destroyed when Filminera took 14 hectares of land that was used by the cooperative to build tailings ponds. Filminera has acquired land by forcing owners, filing cases of eminent domain, which have been resolved without a due process of law, Mrs. Verano claims.

The women of the cooperative are working on finalizing a new project proposal to reforest and rehabilitate 3 hectares of a mangrove area in Port Barrera. Mrs. Verano says she hopes “this will create a big impact in our advocacy to let the Philippine Government know the bad  situation of Port Barrera and the community itself for the Government to take action to close the mining operation of Filminera, and at the same time, we hope it will also help a little with regards to the economic problem of the members”. The cooperative is also looking for funding to start a bakery and other alternative and sustainable sources of income.

“Empowering women is very important to us. From the start of our campaign and advocacy the most active participants have been women.  Our goal is to save the ecosystem of Aroroy and fight for the closure of Filminera. We are fighting for the survival of our family and the future of our children,” Mrs. Verano emphasises.

But Mrs. Verano worries because “the situation on the ground is deteriorating for women environmental defenders, and some have received death threats. The Government should take respective human rights obligations and responsibility seriously”.

“We are urging the Philippine Government to take urgent action to remove barriers in access to effective remedies.  As a duty bearer, the Philippine Government should Respect, Protect and Fulfill all the rights, urgent needs and hear the voices of the women in the mining affected communities.  A legitimate exercise of these human rights must not result in criminalization, intimidation or even killing of the women rights holders,” Mrs. Verano adds.