Women in South Africa: Water a fundamental right in the time of COVID-19 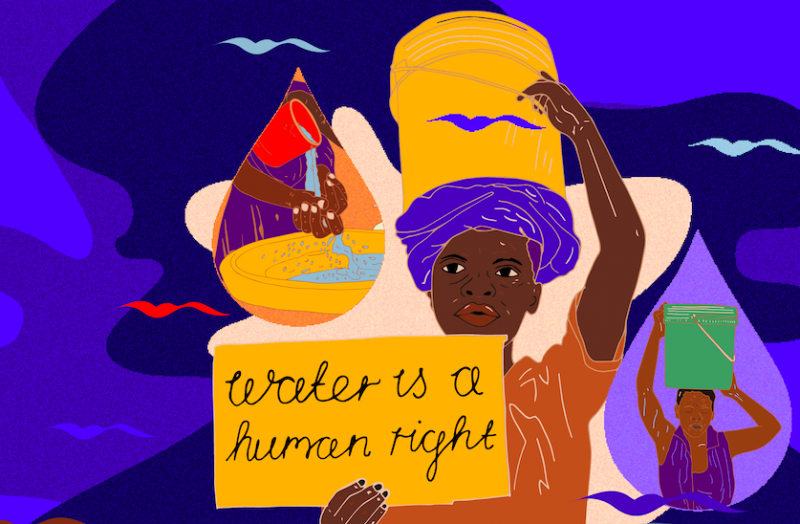 Where are the voices of working-class and rural Black women in the larger story about COVID-19 in South Africa? This is a question I ask every single day as I read the newspapers, listen to and watch the seemingly endless news reports on radio and television. Over the last few days, I have been on the phone, trading messages via WhatsApp and SMS with women from across South Africa and it strikes me how, time and again, the stories they tell of what they are facing during this pandemic are the same.

Water is the most burning issue. Every public service announcement about COVID-19 underscores the critical importance of handwashing and hygiene in general. But how is that possible in a context where, for millions, the taps run dry, the rivers have dried up or been polluted by droughts or nearby coal plants?

“We have no running water. We are really struggling in our communities, we have to walk for two kilometers to collect clean water and it’s not safe… Women are at a great risk of being harassed. We don’t have a choice but to walk that far, we are worried that we will get sick. We wish our government can hear us.” — Mama Medical Nziba

“[The] government is allowing mining companies to operate and access water for profit. I am asking myself if water was truly a human right, why don’t we have it? If corona is killing people, I am scared that people in my community will be easily infected because staying at home is a restriction that cannot realistically be followed.” — Yvonne Sampear from Greater Phola/Ogies Women Forum

“I am sick and old, living in a shack without water is difficult for me. I am only able to fill one bucket of water a day. What makes things worse, municipalities decide who must have water and as poor people we are excluded. I am paying the price of being poor and not having been educated, I am feeling the impact on my heart and my sick old body.” — Gogo Emma from the coal-mining town of Phola

“There is a silent fight between the poor and rich over this essential commodity. There is also a fight between a constitutional right and us. Our desperation to have access to water is invisible to the eyes of our leaders. We have been taken for granted for many years. In Bambanani, we used to get water from the borehole and it’s now not working; we have to buy water for drinking or hire cars to go to town to collect with the buckets. There is no movement at all in terms of the minister’s announcement that they will supply water tanks to people. We are hopeless.” — Nelly Nkosi

Somkhele, in South Africa’s southeastern province of KwaZulu-Natal, is just one town where the water crisis has hit particularly hard. In a region stricken by drought, most of the water in the Somkhele area has been diverted to supply the local Tendele Coal Mine. Coal is the main fuel used for power generation in South Africa, making the country the world’s seventh-largest coal producer one of the top 20 emitters of carbon dioxide worldwide.

The Tendele Coal Mine has dried up the water taps and river from where women used to collect water. The Minister of Human Settlements, Water and Sanitation promised the affected communities that the government would provide water but up to now, that hasn’t happened — even after the women in Somkhele organized themselves to escalate the matter through demonstration in 2019.

In the neighboring community of Fuleni, Zamaphi Ndimande said, “Our area was one hit by drought and all because of changes of the climate. We are wondering if the municipality is failing to provide communities with adequate water, where are the mining companies going to get their water from? We as the women in Fuleni, we don’t want to wait on the government, we want to drive our own economy. Not having access to water is a big challenge as most of our ideas need water—water is life.”

Water rights during a pandemic

Chapter 2 of the Constitution of South Africa states that “everyone has the right to have access to sufficient food and water.” Yet we have not seen this constitutional right being enacted to ensure the health, safety and dignity of ordinary citizens.

Coupled with the growing global pandemic of COVID-19 in the country, the present situation has only contributed to a mounting health crisis which adversely impacts communities fighting for their basic survival and access to essential services. The global messaging of prevention and safety to “wash your hands” simply cannot be practiced as communities have had, and continue to lack access to water.

Many of these local communities have repeatedly raised their concerns and struggled for years to get a steady and reliable supply of clean water to poor communities with many sharing communal taps, facing frequent water disruptions, faulty taps and ailing infrastructure.

Women in communities are the ones who carry the burden of water problems. They are standing for long hours waiting for water supplies, which exposes them to others and heightens the risk of COVID- 19 transmission. Walking long distances to fetch water places women at grave risk of sexual violence and many do not have the financial resources and cannot afford to pay private water vendors who are often the only avenue to obtain clean water supplies. Some women, who have been turned away by police when trying to collect water, even wait until it gets dark so they won’t be seen.

Civil society organisations acting on behalf of women in more than 200 largely rural and extremely poor communities across the country, at the frontline of experiencing the threat of the COVID-19 crisis, have called on the South African government to address their demands:

It is critical that local and national government act immediately to ensure the swift delivery of water to local communities, not just to address the lack or shortage of water in the short term but fully address the chronic lack of water that communities face.

WoMin is a Pan-African ecofeminist alliance and a partner of the Global Alliance for Green and Gender Action. The alliance works with women activists, communities, organizations and movements to make visible and publicize the impacts of extractives on women and their communities; supports movement building and solidarity efforts to stop destructive mega projects; and works to support women to dream of and campaign for an African, ecologically-just, women-centred alternative to the dominant destructive model of development. To learn more about their work, click here.