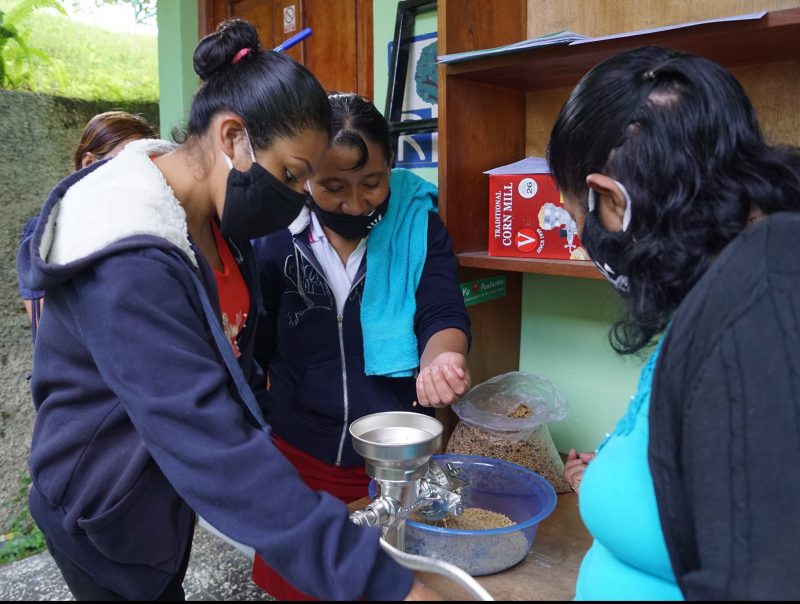 The unpredictability of the weather in Nicaragua makes it difficult for rural communities to know when to sow their seeds; crops can’t thrive in soil that is too arid or too wet. One after another, hurricanes, landslides, drought, and flooding have battered Nicaragua, one of the countries most affected by climate change according to the Germanwatch ​​Global Climate Risk Index. You just have to travel to the country’s northern mountains in the region of coffee-producing Jinotega to see the impact; coffee farms — an industry which employs a third of Nicaragua’s working population — lay in ruins with uprooted bushes, inundated fields, and fallen unripe berries in the aftermath of hurricanes Eta and Iota, record-breaking Category 4 storms which struck Nicaragua last November within two weeks of each other.

One community-based organization in Jinotega, La Cuculmeca, is experiencing these impacts firsthand and responding to this challenge by training women and their communities on how to monitor what’s happening with the climate. The organization has set up four climate stations at various elevations to measure rainfall levels and the temperature. Based on these measurements, community members can exchange information, create weather alerts, and make forecasts, giving communities the ability to determine when it’s best to sow their seeds and understand the changes in their climate.

Enabling communities — especially women and youth — to participate and drive their own development is central to La Cuculmeca, which is a partner of the Fondo Centroamericano de Mujeres (FCAM), the lead organization of the Global Alliance for Green and Gender Action (GAGGA). La Cuculmeca was founded in 1990 for the development of adult education programs with an emphasis on sustainable agriculture in Nicaragua’s department of Jinotega. Through necessity, La Cuculmeca added emergency relief and community food sovereignty to their areas of expertise following the deadly effects of Hurricane Mitch in 1998.

Food and water insecurity in Nicaragua

Thirty hurricanes passed through the Atlantic Ocean last year, making 2020 the most active season on record; unusually warm surface temperatures in the Atlantic are causing storms that are more frequent, as well as more powerful and destructive. Jinotega is located in the Dry Corridor, a stretch of tropical dry forest spanning from Mexico to Panama and one of the regions in the world most vulnerable to disasters resulting from climate change. Prolonged drought in recent years worsened the damage caused by Eta and Iota as hardened soil was unable to absorb the rain, increasing flooding. Four years ago the effects of El Niño destroyed almost all of Nicaragua’s maize crops and over half of its bean crops.

Women and their families throughout Nicaragua are seeing their rivers and water sources disappear; more than 48 percent of the country’s rural population does not have drinking water systems. It is the women in these areas who have to manage and ensure the availability of water at home due to the gender role that has been assigned to them. The women community members use water for domestic and other care tasks such as preparing food and caring for the sick, tasks which occupy between 5 to 8.5 hours of the women’s day — not counting the additional hours to fetch the water or wait until the water supply is restored. Despite women’s critical role in water management, gender roles prevent them from participating in the decision-making over resources.

Across their programs, La Cuculmeca prioritizes education because they see it as the basis for developing other economic, social and cultural rights, social justice, and sustainability. Their belief is that information gives women the security and ability to make better decisions not only in their family, but also in their community so that it can become more resilient and adaptable. The organization recognizes that what they do locally will have a global impact, starting with the women and family, the farm and community, and eventually transcending the municipality, department, country, and region.

With this in mind, La Cuculmeca got involved in various local, national, and international platforms related to water and climate that allow local women and communities to raise their voice and demands about what is happening in their territories. At a local level, they have introduced proposals to the Municipal Strategic Plans and Municipal Investment Plans in the areas of environment, food safety, and citizen participation. On a national level, La Cuculmeca’s study on “Advancing Gender Equity in Community Water Management,” conducted with other Nicaraguan organizations, identified the role of women and gender gaps in community water management across the country, and proposed concrete actions to integrate a gender perspective.

Another study La Cuculmeca conducted with a local partner surveyed households in 91 rural communities across the country on water access, quality, acceptability, participation, and accountability. Previous nationwide surveys monitoring water access largely focused on the availability of infrastructure; La Cuculmeca’s joint study served as a model for developing and implementing human rights-based indicators within or alongside national monitoring processes, with the potential to help local stakeholders in their advocacy to realize the rights to water and sanitation. La Cuculmeca also worked with other organizations to develop trainings for women and men on community water management, and led advocacy for the right of access and the non-privatization of water, from which proposals for national policies have been introduced.

They are also involved in La Alianza Nicaragüense ante el Cambio Climático (Nicaraguan Alliance for Climate Change, in English, or ANACC) and an international exchange between young people from around the world to discuss joint climate action. ANACC is an inclusive platform made up of 52 actors focused on climate change mitigation and adaptation through participatory processes and local advocacy from a local to international level. ANACC influences public policies and plans such as the Climate Change Law and National Plan of Adaptation to Climate Change, promotes adaptation actions in the territories, and monitors regional and global climate processes.

With the support of FCAM, La Cuculmeca is implementing a project to enable greater resilience among girls and women in dealing with climate change in nine communities of Jinotega through capacity building, emphasizing personal development and environmental management. The women learn about their ecological rights, agroecological practices such as crop diversification and the creation of organic fertilizers, and develop and implement action plans based on their and their communities’ needs.

From this process, women have initiated conversations with different public departments on building drinking water systems, started reforestation and community/school ecological garden projects, and with the support of GAGGA’s Autonomy and Resilience Fund, 18 women were able to become more food secure and enhance their families’ income during the pandemic by constructing chicken coops and learning how to care for them.

Many of the women who participated in these projects later identified themselves as new leaders and respected decision-makers in their family and community life. Through this project, women further inspired others in their communities, and a small group of women environmental promoters spread their newly acquired knowledge to an additional 86 women. Together, they formed a platform of women defenders of environmental rights and are able to link to other local-level platforms.

La Cuculmeca also receives support from GAGGA partner, International Analog Forestry Network (IAFN), that in 2019 held a workshop on Analog Forestry in La Cuculmeca’s Jinotega community, an approach that restores the productivity of degraded land and provides new sources of food and income to communities. Twenty-five women from 10 organizations across Nicaragua participated in an IAFN training with the help of another GAGGA partner Fundación Entre Mujeres and FCAM. Two women from La Cuculmeca became technical facilitators who went through a training process to deepen their knowledge about Analog Forestry techniques and their implementation in a demo site directly funded by IAFN. The workshop participants exchanged seeds to preserve biodiversity and increase food sovereignty on their plots, learned about which plants are most suitable for their area, the right time to plant, and water conservation techniques, and La Culcumeca is now teaching other women and young people of the community about Analog Forestry.

By collaborating across a growing network of local, national, regional, and international actors, La Cuculmeca has not only been able to strengthen the capacities of women as community climate leaders, but they’ve also provided a platform to raise their voices so that local women’s realities and demands inform and influence climate action on multiple levels.

Above featured photo is from the photo archive of La Cuculmeca’s project: “Women energizing the family economy.”