Women in Mozambique lead local climate action from the inside 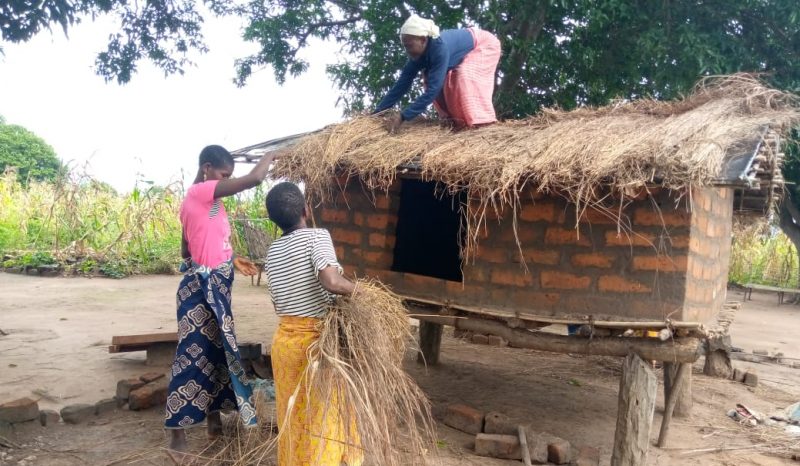 When Taciana Gabriel, a 51-year-old farmer outside Malema Village in northeastern Mozambique, first started coating her crops with a concoction made up of eucalyptus, piri-piri peppers, tobacco, and garlic, her neighbors thought she was going mad. Before she started applying these local ingredients on her farm, Taciana would find her peanuts, nhemba beans, mapira, and cassava destroyed by pests. She then joined a women’s association and learned how to produce this natural pest repellent from a session with Livaningo, Mozambique’s first legally registered environmental advocacy organization and a Global Alliance for Green and Gender Action (GAGGA) partner. After seeing the positive results, some of her neighbors decided to try it out as well – to great success!

Livaningo discovered that in many rural communities, older generations were not passing on their ancestral and traditional agricultural knowledge to the next generation. They wanted their children to climb up the social ladder and avoid a life dependent on the fields or the sea, a life they considered full of insecurity and poverty. Facing prolonged drought, many of these communities are now trying to rescue these old practices. Livaningo is supporting them to do so by holding workshops where village elders bring native seeds and grains, reflect on what they and their parents did in the past, and exchange knowledge with others both within and outside their community. Some of the practices communities are bringing back include creating seed banks, drying produce so it lasts longer, and making natural pesticides and organic fertilizers.

Livaningo’s trainings on seed conservation and distribution of materials to build 20 seed banks, supported by GAGGA, is leading 400 women and their 1500 family members in northeastern Mozambique to adopt more nutritious diets and increase their variety of beans, maize and other crops. The organization is also advocating with Mozambique’s Ministry of Agriculture to recognize agroecology as an environmentally friendly and cost effective way to produce food, promote food sovereignty through native seeds, develop strategic climate change policies coming from the bottom rather than the top, and create a department specifically for small scale farmers so they can access inputs, finance, and technical assistance.

“Women are the ones with the traditional and ancestral knowledge, the knowledge of which seeds are good,” said Sheila Rafi, Livaningo’s executive director. “In terms of climate change, women are really agents of change in mitigation and adaptation. In working with men and women, we recognize that women are very engaged in contributing to climate action in Mozambique, leading the process of [accessing and protecting] water because generation to generation they are the ones who have the heavy work of walking long distances, having to travel farther every year. In agriculture, they are the ones who have an important role in food security, implementing alternatives and responding to natural disasters.”

Rural communities, who make up the majority of Mozambique’s population, have experienced increases in temperature and decreases in precipitation in the past decade, frequently leaving them with little to harvest. These impacts have left many communities without water, and women from one community in the southern village of Nguvane reported having to drink the same cloudy water as their cattle after traveling ten kilometers every day for 40 liters of water and sometimes up to four times a day.

Two years of successive droughts in some of Mozambique’s communities have increased men’s migration to South Africa and other places in search for jobs, considerably increasing women’s role in productive work, such as work in fisheries or in alcoholic drink brewing. This increases the burden on women who have to spend extra time on productive work on top of pre-assigned domestic tasks, while not having control over natural resources and property rights.

Mozambique: “A place to extract everything the world needs”

Mozambique ranks 10th among the countries most vulnerable to natural disaster risks, including cyclones, droughts and floods. In 2019, back-to-back Category 5 cyclones killed over 600 people, displaced millions in the region, and destroyed 3,000 square miles of farmland weeks before the annual harvest in a country where three out of four people earn their livelihoods through rain-fed agriculture. In Mozambique, there is evidence that rising temperatures are making cyclones stronger and more frequent.

Since 2008, the country has also been experiencing a rise in foreign investment from multinational mining and gas companies, like Rio Tinto, Total and Vale, driven by the discovery of Mozambique’s vast deposits of coal and natural gas. Communities who were living by the mines in the country’s Tete province were displaced and resettled, forced to move into crumbling, leaky houses without water or electricity, barren fields, and found no job prospects, while villages close to gas projects in Cabo Delgado were also resettled. President Filipe Nyusi of Mozambique has said that his government expects to make over US$100 billion from natural gas projects, prioritizing fossil fuel extraction and economic development at the expense of human rights, proper compensation, and the consent of affected communities.

“In 2008, everything became chaotic in terms of transforming our country as a place to extract everything the world needs,” said Sheila Rafi. “That is a big issue in Mozambique; we are looking for solutions from the outside without consulting and hearing people who have traditional knowledge and community alternatives. Look at South Africa — when you just cross the border you can see [hectare after hectare planted with the same crops]. For [the government], this is development. For us, the same picture means this is not possible: where are the people? Where are the women and children in this big picture just of maize and beans?”

Women look for climate solutions from the inside

To adapt to climate change impacts, women across communities in Mozambique have acquired, strengthened, and exchanged a variety of skills and knowledge through Livaningo’s tailored support and workshops: the use of improved cook stoves to reduce biomass energy use and deforestation, community weather warning systems, restoration of degraded areas and protection of native forest, cultivation practices to grow different cultures in the same plot, the use of local technology to make channels of water, and the development of action plans regarding disaster risk management. The women who participate in these programs then share this knowledge with others in their communities, further spreading climate resilient practices beyond their village.

Sheila observes that many women from affected communities are now self-organized and capable of defending their rights related to the access and control of their land, resources, and forests. They are maintaining dialogues and participating in district level processes, asking questions, and pointing to their rights in the constitution. When Livaningo fully transfers projects into the hands of the community, some of the villages continue to monitor environmental exploitation and maintain strong internal participatory processes.

As those who hold ancestral knowledge and are responsible for water and food in their communities, rural women in Mozambique are playing an active and critical role in local climate action. From reviving old agricultural practices to adopting new energy-efficient technologies, the women Livaningo supports are demonstrating how to find and implement climate solutions from the inside in a country that has long sought support externally.

The featured photo above is from Livaningo.