Women in the Bolivian Amazon organize against oil exploration 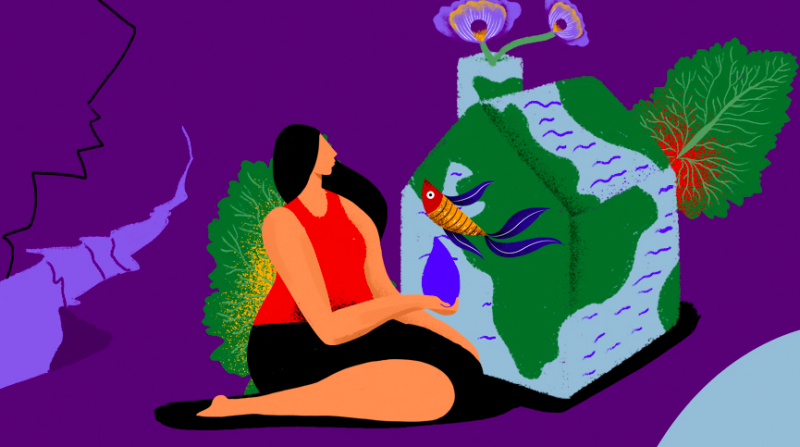 For millennia the Amazon basin of northern Bolivia has been inhabited by more than twenty Indigenous communities who have lived with the jungle and built their homes on the banks of the Beni and Madre de Dios Rivers. In the last five centuries they have experienced the repression of colonization and different pressures due to the exploitation and commercialization of natural resources; First it was rubber, animal hides, then gold and tropical woods, joined after by oil, livestock and coca. Indigenous women resist these threats with dignity.

Through a supreme decree in October 2015, the Bolivian government extended the country’s hydrocarbon frontier into the Indigenous territory of the Cavineño people. Between 2016 and 2017, the Bolivian state-owned enterprise dedicated to the exploration and exploitation of oil and natural gas, Yacimientos Petrolíferos Fiscales Bolivianos (YPFB), entered the territory to conduct a 2D seismic survey. This is a method that uses extremely loud blasts of sound from powerful airguns to penetrate the floor, and detect the size and location of hydrocarbon deposits. Only nuclear explosions are louder than these emitted soundwaves, and they are released every 10 seconds or so for several hours, day after day.

Scientists have seen increasing evidence that this noise is an ecosystem-wide pollutant, interfering with animals’ own sounds and disrupting their ability to communicate, scaring them away and changing their behavior, disrupting migration, and killing fish eggs and  microorganisms that are important to the watershed equilibrium.

YPFB conducted the survey without meeting the minimum requirements to reduce their socio-environmental impact— prior, free and informed consent with local communities. Though the Bolivian Constitution states this is an obligation of the State and a right of the people, it is non-binding and is easily breached. Ignoring this process, YPFB left local communities unaware about the risks and impacts that their activities would have on their territories.

Once again, the company wants to enter more specific areas in the territories of the Cavineño and Tacana Cavineño people to do a 4D seismic survey, which is of great concern to the local women. The seismic surveys have already caused significant social and environmental impacts in the communities that are already very vulnerable to climate change. As in the rest of Bolivia, the community is experiencing the climate change-related impacts of rising temperatures, longer dry seasons and increased water scarcity.

Selling chestnuts is their main source of income, but due to increasing temperatures chestnuts are now drying out and falling off before ripening. One woman from the community said, “Even during the rainy season, the climate is very hot. It reaches 38 degrees, when before it did not rise above 35, 36 degrees. The plantations dry up, the rivers dry up and the little fishes die.”

The main source of food for the Cavineño and Tacana Cavineño people is fish which inhabit the sacred bodies of water in the area. In 2020 one of the main lakes in the community dried up for the first time and a large number of fish have died in the local river and lakes. A female community member also said, “You would see monkeys, wild turkeys, when you go along the path that leads to these communities, but now not a single animal.”

A good part of the daily life activities of Indigenous women in this area revolves around the collection of chestnuts, and the river, where they wash, fish, collect water, bathe and meet among themselves in a space of intimacy. With the entry of the company, they feel invaded in their own space by strangers, and the chestnut groves they frequent, have been used to open up roads for the seismic survey.

The Organization of Indigenous Women of the North of the Bolivian Amazon (OMINAB) is a group that seeks to ensure the rights of Indigenous women and respect for their territories, and which is made up of women who represent the Cavineño, Tacana, and other local peoples. They have organized trainings to expand their knowledge about seismic activity and its environmental and social impacts since neither the government nor the company properly informed them. Likewise, its main objective is to bring together Indigenous women representatives of all communities and strengthen their skills to participate in decision-making that affect their lives and territories.

“The women of OMINAB want to take care of ourselves, as Amazonian women, communities and peoples, we do not want more exploitations in our territory that are causing damage to our water, our land and to us women. We want to live quietly, we want to live well,” said an OMINAB member.

The mobilization and demands of the Indigenous and rural peoples in Bolivia have led the state to adopt significant progress on paper in their favor, such as giving them the designation “Native Community Lands” or “Tierras Comunitarias de Origen” for autonomous and communally owned Indigenous lands. While Bolivia’s 2009 Constitution guarantees Indigenous people the rights to natural resources found on their lands, in practice, the government has prioritized the commercial opening of the country and increasing concessions for the exploitation of hydrocarbons, even in Indigenous territories and protected areas.

The Native Community Lands in the country’s lowlands contain 55 percent of the forests and jungles in Bolivia, where Indigenous peoples play a critical role in the conservation of water, forests and life. However, the Amazonian indigenous territories continue to face many economic pressures and threats to their territory, the reason why they have to organize to defend their land and ways of life, while they struggle to meet their daily needs, facing multiple obstacles to live a peaceful and dignified life.