We, Women are Water 2020: The El Burro wetlands in the ¨land of water¨ 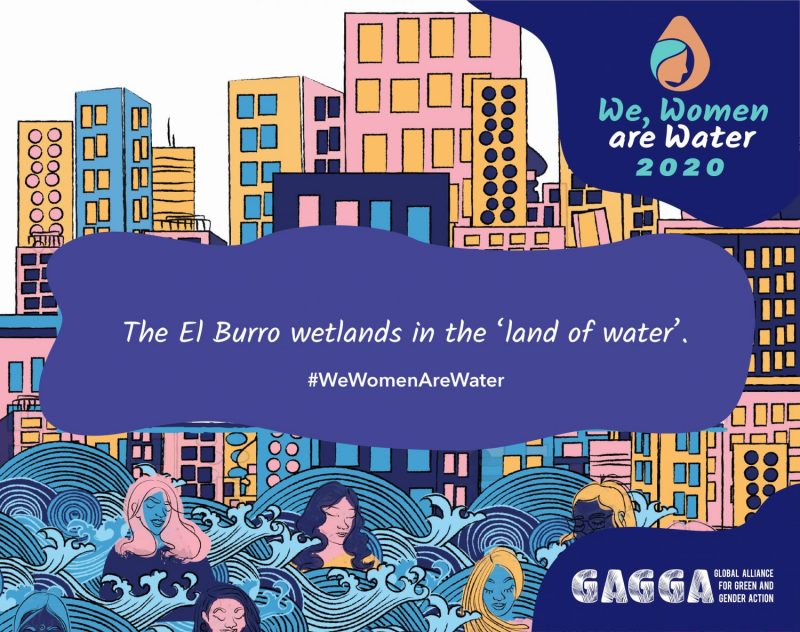 The city of Bogotá, with its 7.5 million inhabitants, has been built mainly on wetlands and ecological corridors. The El Burro wetland, located in the Kennedy district – which is one of the most polluted – is one of the last living spaces which purifies the water in the city. El Burro is fed by the Fucha River (the Muisca name is Fuhucha meaning ‘woman’) and flows into the Bogotá River; both main rivers in the city.

The El Burro wetland was fragmented by the highway ‘Avenida Ciudad de Cali’ and as a result is divided into two segments: 80% in the eastern sector and 20% in the western sector. This division has negative ecological impacts because it cuts off the water connectivity and the passage of bird species between the two areas, affecting the water retention capacity of the wetland.

In 2012, the Environment Ministry endorsed the incorporation of the smaller section, “El Burrito”, to the larger El Burro wetland by recognizing it as an environmental protection area since it has all the characteristics of a wetland ecosystem, and highlighted the importance of the many ecosystemic goods and services that it offers the city.

However, in December 2019, Mayor Enrique Peñalosa signed a motion in which he granted a permit to the Marval company (a Colombian firm that has already had several public complaints) for the construction of housing and a shopping center on “El Burrito”. The construction license is in process and they have already begun placing excavators and laying pipes to drain out the area. The aforementioned motion stripping el Burrito of its protected status claimed that there is no longer a visible body of water, that the species of fauna and flora have disappeared and the space interrupts the route to the El Dorado airport.

The young feminists of the collective “Corporación Sihyta”, alongside other community leaders, have discussed the impacts of construction on the El Burrito wetland and carried out protests through demonstrations and artistic interventions. They organized a petition to pressure Marval to hand the area over to the state to be protected and restored, and included in the El Burro wetland environmental plan. Their demands have been echoed by the regional media, the Local Environmental Corporation, and the Council of Bogotá.

Corporación Sihyta, along with other organizations, are focusing their efforts on three key areas: