Vice Versa: “A woman is not meant to stand in the spotlight” 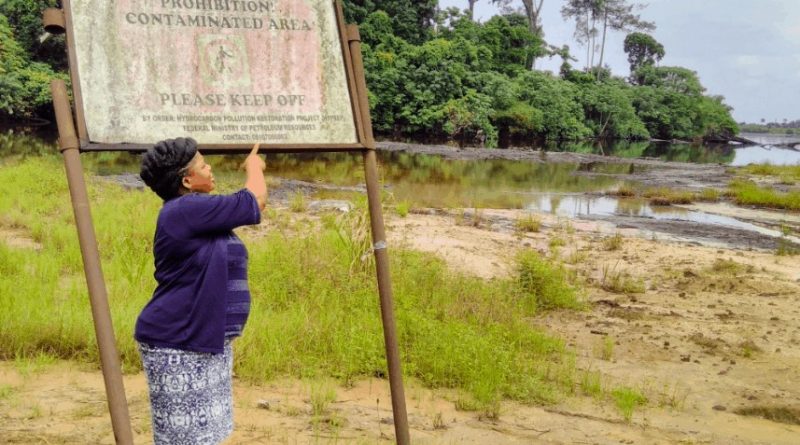 Although women suffer most from the pollution in the Niger Delta, they are seldom asked how to solve the problem. The Global Alliance for Green and Gender Action wants to change that: “Men have been making the decisions here for too long and little good has come of it,” says Martha Agbani. A tour of the Delta.

With a population of over a million, Port Harcourt is not only the capital of the state of Rivers, but also the gateway to the Niger Delta in the south of Nigeria. Little remains of its reputation as a “garden city”: a permanent layer of smog hangs over the city like a woolen blanket, and if you blow your nose, your tissue fills with soot. The effects of the country’s two largest refineries burning off gas in the Delta reach to the gates of my hotel.

The Niger Delta is Nigeria’s largest oil-producing region, pumping crude oil worth more than fifty billion dollars out of the ground every year. But the local people see very few of the benefits, only the destruction of their land by the many oil disasters.

Together with Martha Agbani, director of the Lokiaka Community Development Centre, I go there early one morning. Brought up in the Delta, she has seen her land becoming increasingly polluted. Her mother led the women’s movement in the Movement for the Survival of the Ogoni People (MOSOP) and took part in demonstrations in the 1990s.

When her mother died in 2001, Agbani decided to continue her fight and joined MOSOP – and within a few years she had taken over her mother’s old position in the women’s movement. But it was still not enough, she tells me.

“The region became less and less safe, especially for women. Abuse and rape by soldiers and rebels was a daily reality. And no one did anything to stop it. Even within MOSOP, women’s rights did not seem a priority. In 2009, I set up my own organization to call attention to women’s rights in the Delta and to fight for them.”

Agriculture and fishing have disappeared

That was badly needed, says Agbani, as women suffer the most from the consequences of their living environment being polluted by oil. This is confirmed by a study by the World Bank. While men benefit from the extractive industry, in the form of work and income, women and children are most vulnerable to the risks posed by the industry, such as social exclusion and ecological degradation.

This clearly visible in the Niger Delta. The men benefit from the employment the oil industry offers, while women lose out.

They traditionally provide food in the Delta by working on the land, fishing and catching crabs and snails in the creeks. But the land and water have become so polluted through oil leaks that agriculture and fishing have largely disappeared.

“The Delta was known for the tastiest fish,” Agbani remembers. “People came from the whole country to buy crayfish and shellfish. Now the market has collapsed and the fish that are sold now are very small and often full of crude oil.”

Under the law, women in the Ogoni region cannot own land. When the men die, the land is often transferred to his family or sold to the government without compensation for the women.

Women’s health also suffers the most; through frequent contact with polluted water, women are susceptible to skin diseases and other physiological disorders. Recent research shows that infant mortality in the Delta has more than doubled in recent years and that miscarriages occur more frequently.

“Because many women in the Delta have not been to school, they are often unable to read and thought that all the catastrophes that happened to them were punishment from God,’” says Agbani. “It was only when we held meetings and told them about the effects that the penny dropped and the women themselves wanted to be involved in the clean-up process.”

So Lokiaka decided to organize ecological training, together with the Kebetkache Women Development and Resource Center in Port Harcourt, to teach the women to take samples from the water and the soil.

“Although the clean-up is a technically complex process and the women from the community are often unskilled and unqualified, they can give an estimate of the how the situation has changed, because they live here and know the local environment. We show them that we monitor the clean-up and make sure that the job is done properly.”

Lokiaka and Kebetkache are supported by the Global Alliance for Green and Gender Action (GAGGA), a strategic partnership that fights for the rights of women around the world to clean water, food security and a safe and healthy living environment.

With a combination of environmental activism and feminism, the partnership wants to strengthen the position of women in the Niger Delta, so that they can exert pressure on political leaders to fulfill their responsibility to ensure that the Delta is clean and safe. It also provides skills training, led by Lokiaka, so that women in the Delta can seek alternative forms of income.

“In recent years, the government has made half-hearted attempts to set up training courses for women, but they were for skills that no one needed, like making bead jewelry or soap. What use are they to someone living in rural areas?” Agbani asks rhetorically.

“We wanted to give the women training that they could put into practice immediately to earn income,” she says, “such as how to cultivate mangrove and fruit trees. Fruit trees are ideal for this climate. They are among the few plants that grow well in the polluted soil and are easy to cultivate, so that women can sell them on the market.”

The choice for mangroves is also strategic: “One of the main aims of the clean-up operation is to restore the ecosystem, which originally consisted largely of mangrove forests. When the process comes to an end, new mangroves will be needed and our women will be able to supply them.”

To see how it goes in practice, we visit some of the women Lokiaka works with. We start in Kegbara Dere (better known as K-Dere), a small village in the heart of the Niger Delta and important in the production of oil. On the edge of a village, we stop on a river bank.

“This used to be a beautiful natural area, full of mangroves and with an abundance of crayfish and fish. Look at it now!” Agbani points to the fallen trees that have sunk into the boggy ground. The layer of oil on the water betrays the tumultuous history of the area.

“After Shell started drilling here in the late 1950s,” she says, “there were a number of serious oil leaks. The first, in 1972, lasted more than seventy days and destroyed much of the local environment.”

Barisi Dumbor lives close to the affected area and shows us the Shell pipeline that runs past her house. Although Shell stopped producing oil in K-Dere in 1993, there were still many leaks in the years that followed, says Dumbor, the effects of which can still be seen.

“The land and groundwater are badly polluted,” she says, “and if the wind is blowing the wrong way, it even my hurts my eyes and throat to breathe outside.”

When her husband died suddenly in 2008, Dumbor had to find a new source of income to support her two young children. She now works on the land of a farmer in a nearby village and sells the produce on the local market.

Hope will make the difference

But it is a great challenge to make ends meet. So she attended a Lokiaka training course a few months ago to learn how to plant fruit trees and mangroves. “My goal is to cultivate enough trees to sell, so that I can live from them,” she says.

At the side of the house, there is a line of plants all neatly potted in a black plastic bag. Agbani feels the plants. “They are much too dry,” she says to Dumbor, critically. “Are you giving them enough water?”

That’s the most difficult part, Dumbor admits. “The water here is so polluted that I have to go a long way in my canoe to fetch clean water, which is not always that easy.”

Looking at the small plants, it is difficult to imagine that this approach will make a difference, but Agbani is optimistic. “Even though it is going slowly, there will come a time when the clean-up is finished and they will come to us for plants,” she says. “And the project also has a higher aim: to offer hope for change and to show women that they have not been forgotten. That hope will make the difference.”

The second garden we visit is an oasis of calm and color. With her green fingers, Beatrice Nlobu has cultivated her trees with care. Enthusiastically, she walks between the plants. “Pineapple, pear, guava, avocado, mango,” she points out to us, and picks us some kola nuts.

The nursery plants are growing among the bigger trees, and look strong and healthy. Yesterday, she sold a few to people in the village, for 1,800 Nigerian naira – about two euros – each, she tells us proudly. “At the market, I sometimes earn 10,000 naira a day. I’ll soon be able to open a real nursery!”

On the way back to Port Harcourt, we visit one more woman who took part in the training. Jessy K-Nubani is sitting outside her house with her whole family. A few nursery plants stand against a wall, looking a little worse for wear. “What happened?” Agbani asks, shocked. K-Nubani tells us that her neighbor threw acid over them a few weeks ago.

“When I had just started planting them,” she says, “people would come to look at them. That made him jealous. ‘A woman is not meant to stand in the spotlight,’ he said. When I woke up the next morning all the plants were dead.”

In the car, Agbani thinks about the woman’s story. “This is typical of Nigeria,” she says. “The idea that women should be seen and not heard lies so deep in the patriarchal culture that women are afraid to stand up for themselves, so that they don’t take part in the decision-making process either.”

She says it’s the same with the clean-up operation: “HYPREP [the organization responsible for the operation on behalf of the government] organizes consultations with local leaders, but they are all men and they have their own agendas.

“Through the partnership we have trained women to conduct action campaigns and speak in public, and in December we are organizing the national Niger Delta Women’s Day of Action for Environmental Justice to call attention to the problems in the Delta.

“In this way, we want to show that women are perfectly capable of being leaders and deserve a place around the table. Men have been making the decisions here for too long and little good has come of it. It is time that women take part in deciding what should happen.”

The Global Alliance for Green and Gender Action (GAGGA) is a strategic partnership led by the Fondo Centroamericano de Mujeres (FCAM) in Nicaragua, in cooperation with the Dutch organizations Both Ends and Mama Cash and the Dutch Ministry of Foreign Affairs. The alliance has been awarded a budget of 32 million euros for programs in more than thirty countries in Latin America, Africa, Asia and Europe.