We, Women are Water 2020: Ixquisis women defend their rivers 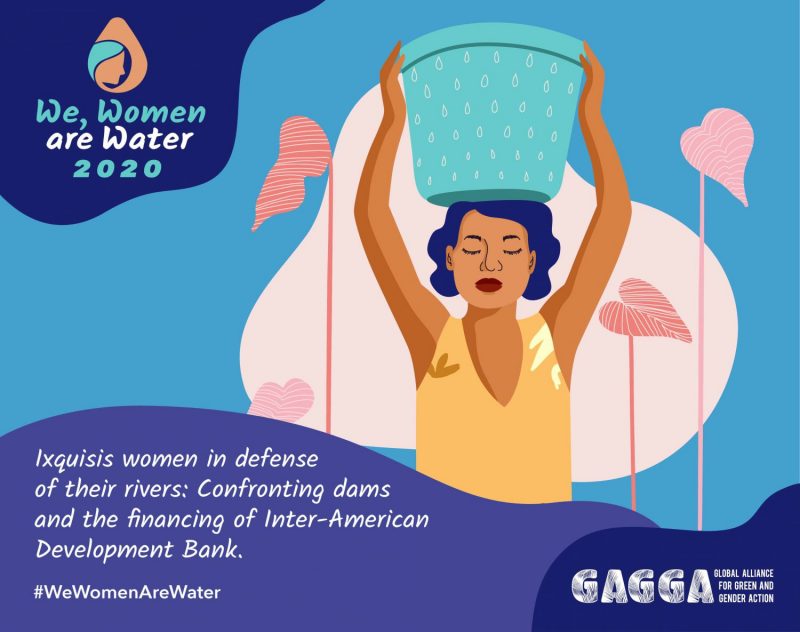 The micro-region of Ixquisis, in the north of the region of Huehuetenango, Guatemala, has been inhabited by indigenous Mayan communities since ancient times. These communities have built their ways of life based on respect and care for nature, subsisting mainly on agriculture and fishing. The rivers in the micro-region have long been a source of life for individuals and for the general population.

The women of Ixquisis are in charge of the sustainable management and care of the community’s natural assets. They play a key role in preserving traditional knowledge, powerfully transmitting their knowledge about health and nutrition to future generations. They have thus contributed to the survival of their culture, the indigenous worldview and their traditional way of life. For women, water is an essential element of their daily life.

In 2009, during a community consultation over possible development projects held in good faith, the communities of Ixquisis voted against the development of hydroelectric projects in their land with the intention of preserving the rivers and natural surroundings. In 2010, their decision was ignored. The company Promoción y Desarrollos Hídricos S.A. (now known as Energía y Renovación S.A.) began constructing two hydroelectric plants: Pojom II and San Andrés. The projects are co-financed by the IDB Invest, the investment arm in the private sector of the Inter-American Development Bank (IDB).

In the years since, the life of the Ixquisis communities has changed dramatically due to the construction of the dams. The works have caused scarcity and contamination of water sources, affecting families in the micro-region and especially women.  Contamination and lack of water create an overload of work for women, since they are the ones who must ensure that the household has water and care for people who become ill from contact with water in the rivers where companies dump their waste.

The construction of dams has also brought insecurity and fear. In the region there have been attacks against members of the community, including murders and threats. Before the development of the Pojom II and San Andrés plants, women felt the land and their community to be a safe space – however on the contrary now women feel they are victims of attacks and/or aggressions in their communities.

In light of the damages to health that the lack of water has caused in the life of their communities, Mayan women have participated in the protests against the construction of hydroelectric plants.

The communities affected by the Pojom II and San Andrés dams filed an official complaint with the IDB’s Independent Consultation and Investigation Mechanism (MICI) with the objective of influencing the main actors involved. In the complaint, they ask the MICI to recognize that IDB Invest did not comply with its operational policies and, given this failure, to recommend that the Bank withdraw its investment from the dams considering the serious social and environmental damage these projects are causing. The complaint emphasizes that the impacts suffered by Ixquisis women are even more severe due to women’s daily contact with water and their traditional role as caretakers of natural resources.

The communities of Ixquisis demand of the Inter-American Development Bank that it: