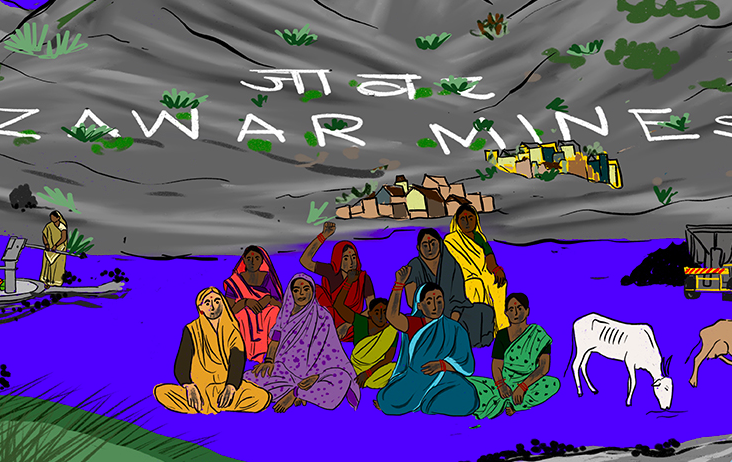 Lakshmi Devi, a Bhil Adivasi woman from Kanpur village in Rajasthan, India, has not been able to harvest a single grain from the three kilograms of pulses she sowed on her 2-acre farm this year. “Look at my field, it has completely dried up because there is no water in the wells or hand pumps for me to irrigate my crops. If there was water, I would have got a proper yield. Without any food or water, how are we to survive?” she said.

Kanpur is a village located in the periphery of the Zawar mines, an underground zinc mining operation owned by Vedanta-Hindustan Zinc Limited in Rajasthan’s Udaipur district and one of the oldest zinc smelting sites in the world. The mines have turned their water sources scarce and completely unfit for use, say the Adivasi residents of the surrounding villages. Women farmers are the most affected by the pollution caused by the mines as agriculture is their main source of livelihood and sustenance.

These mines are located in an area belonging to the Bhils and the Meena tribes, and were partly acquired by the Vedanta Group during the Government of India’s disinvestment drive in 2002. In 2017, the Ministry of Environment and Forests gave an environment clearance for increasing the production capacity of Zawar mines after Hindustan Zinc Limited submitted an Environment Impact Assessment (EIA) Report, and the company is now attempting to obtain clearance for further expansion.

There has been a subsequent rise in environmental violations with the expansion of mines over the past 5 years, limiting local Adivasi communities from using land and resources. Adivasi women in the villages surrounding the Zawar mines have been mobilising to protect their natural resources and demanding liability from Vedanta-Hindustan Zinc Ltd for the damages they have suffered.

Impact of Mining on Adivasi Women around Zawar Mines

“Earlier, when we switched on the motor, we had enough water to ﬁll in our tanks. We used it for irrigation and household use,” recalled Kanta Bai (42), a farmer from Kanpur village around the Zawar mines. “Now, water does not reach even up to our fingers with so much mining underground. What we do get is sewage-like water which damages our crops. Our wheat doesn’t grow anymore,” she said.

Such testimonies from the women farmers and residents of the villages around the mines contradict the claims made in the EIA report. They are not consulted during public hearing proceedings and are excluded from processes of environment decision-making.

The recent introduction of the Draft EIA 2020 bill which seeks to dilute the process of EIA and public hearings will further reduce the space for women affected by mining to access information and articulate their concerns.

Hindustan Zinc Limited, in their EIA report submitted to the Ministry of Environment and Forests in 2016, claimed minimal environmental pollution since Zawar mines are an underground operation. “No land degradation would take place on account of underground mining operations,” said the report. It further added that “most of the dust produced during blasting will settle down underground and get diluted by ventilating air before being exhausted.”

This however doesn’t account for the interconnected linkage of ecosystems where the excavation and blasting processes involved in underground mining impacts the ground water sources, and topography of the land and soil quality. Underground mining processes have exhausted and contaminated the surface water (natural streams) and groundwater sources  (handpumps, boring wells, tanks). As a semi-arid region with scant rainfall, these villages are already facing a severe water crisis.

The EIA report also fails to assess the water and air pollution caused by its overground operations such as the tailings dam and the captive thermal power plant which are located very close to the two directly affected villages of Kanpur and Nevatalai.

The tailings dam, an embankment which stores the byproducts of mining operations after extraction — a mix of crushed rock and processing fluids in this case — is located on a hill right next to Kanpur village. Despite community resistance, a new dam has been proposed next to the existing dam. The finer particles from the tailings dam are carried by the wind in the dry season and deposited on the agricultural fields, increasing the salinity of the soil.

“When we make chai with this water, the milk splits. Even dal doesn’t get cooked properly,” said Janki Devi, a resident of Kanpur village.

After the residents complained, Vedanta arranged for water tankers in Kanpur village. These tankers, however, are irregular and have only increased women’s burden of collecting water. This limited supply has meant that women have to ration their water usage for cooking, washing, cleaning and feeding of cattle.

Additionally, the fly ash from the 80 MW coal-fired captive power plant set up by Hindustan Zinc in the centre of Nevatalai village has left the entire village covered in black dust. Women complained that this black dust sticks to their bodies and comes out of their noses when they sneeze. Their water sources for consumption and irrigation have also turned black causing damages to their agriculture and health.

Manju Devi is a 65-year-old woman farmer whose 2-acre farm is located right next to the power plant, separated by a boundary wall. This boundary wall has pipes built into it; the water that is used to wash the coal is regularly released through these pipes onto her field, turning it black and parched. In the past five years, her agriculture yield has reduced by over 80 percent of its original output. In the past two years, the corn she sowed on her field has completely dried up. With reduced crops from her own fields, she is forced to buy food from the open market.

Her cattle have lost all their hair and weight as a result of feeding on the toxic grass on her field. Due to increased cases of cattle sickness and death, women farmers are finding it hard to sustain their alternative source of livelihood through cattle rearing.

Unable to make any dairy products from the low-quality milk, women farmers find it difficult to provide adequate nutrition for their children. Their expenditures have also increased with increased veterinary costs of the sick cattle.

All this has led to women being caught in cycles of debt. Male members of their families are also forced to migrate after they lose their jobs, forcing many women to fend for their land and families on their own. Women in the villages bordering the mines also suffer painful blistered feet and rashes on their hands from working on the contaminated soil.

Women Speak Out Against Vedanta

In 2017, Adivasi women from the villages affected by the Zawar mines started mobilising to air their grievances and concerns. With the support of a local woman human rights defender, they sought to understand their rights, constitutional safeguards and laws that guarantee their self-determination and recognise their right to free, prior and informed consent in cases of large scale infrastructure projects such as mining.

With a recognition of their legal rights, women from affected villages began to file complaints directly to district authorities. After a lack of response from the government, they chose to address their complaints to Vedanta directly.

Around 800 women from affected villages across several Panchayats (village councils) gathered for a sit-in protest in front of the Vedanta office on 5th February 2019 to demand redress for the violations the company committed. They demanded the restoration of groundwater sources, provision of irrigation facilities and repair of houses demolished by blasting. They also demanded employment for local people in the mines.

After this gathering, Vedanta-HZL constructed a pipeline and water tank in Kanpur village. However, women have reported that water supply continues to be irregular and the water from the pipelines is released only once a month.

“How can a pipeline or tanker provide us with relief when the entire groundwater has dried up? They have dug so deep below that they have interrupted the groundwater channels,” said Sunita, an Adivasi woman farmer from Kanpur village.

Women in the affected regions have rejected these temporary measures that do not address the massive scale of the ecological destruction. The women’s movement in the Zawar mines has demanded that any rehabilitation must take into account the rights of local communities over their existing natural resources on their land rather than relying on handouts offered by companies.

The public gathering was a historic moment for the women from the villages around Zawar mines, however it was followed by a period of backlash and intimidation. “In an area where community resistance has been curbed for quite a while, the mobilisation of Adivasi women certainly challenged the status quo on various levels. Political interlinkages have also divided the community between those who benefited from the mines and those made poorer because of it,” said the local human rights defender.

These vested interests include local political representatives, contractors and other intermediaries who viewed this gathering as an attempt to challenge the mining operations.

Shortly after the gathering, a few local groups organised a smear campaign against the women and the local woman human rights defender, accusing them of violence and destruction of property. As Vedanta started to lay off local mine labour due to the mechanisation of the mines, women resisting against the company were also blamed for the job losses.

While the ongoing pandemic and government restrictions have made it harder for women to gather, they have come together to support each other in this time of crisis. Relief activities by the government and Vedanta remained out of reach for many single and widowed women. With agriculture in the area being completely destroyed by mining, the limited access to food heightened their vulnerability. Women from the affected villages around the Zawar mines are now advocating for a proper rehabilitation of the damages they suffered due to underground zinc mining through the District Mineral Foundation (DMF) funds.

Women in mining regions are now demanding their representation and voice in the fund allocation process of the DMF through a national campaign called ‘DMF ka Hissa’ (share of DMF). As a part of this campaign, women affected by Zawar Mines have sent representatives to the district authorities demanding livelihood support, groundwater restoration, the clean-up of water bodies and health infrastructure with equipment for the treatment of mining illnesses and COVID-19.

Despite the challenges to their mobilisation, they continue to reclaim their rights and future from being destroyed by reckless mining activities. In the absence of spaces for their participation, Adivasi women have created their own spaces to demand for their right to life, livelihood and clean environment.

In doing so, they have challenged the patriarchies within their community, the company and the state by asserting their identities as equal stakeholders — as farmers, foragers, knowledge keepers and economic heads of their families.

This article was initially published on BehanVox in October 2020 and is written by Vaishnavi Varadarajan, a Research Associate at Dhaatri Resource Centre for Women and Children’s Rights – a partner of GAGGA and NGO working on the intersection of gender and environment justice by supporting local campaigns led by Adivasi and rural women to protect their natural resources, knowledge and culture. You can also find the Zawar mine case study here.