Defending the rights of Mother Earth in Bolivia 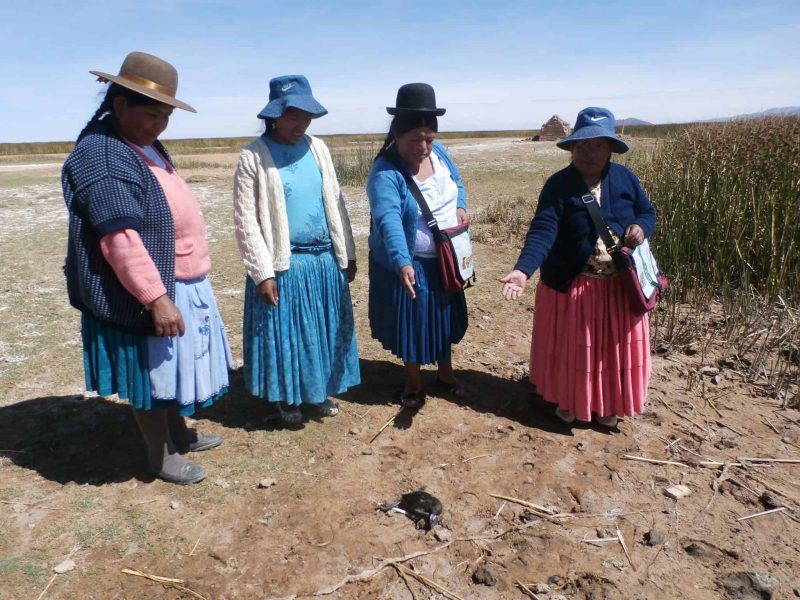 In Bolivia, Mother Earth is considered a living being with rights by the indigenous communities. This ancestral vision has allowed indigenous families to pass on fertile lands, a home and a future from generation to generation, but this way of living has been forcefully changed by the extractives industry. Now the mining concessions that the current government of Bolivia has given to foreign companies are destroying the lands that once had been sacred to these communities.

Margarita Aquino is the Coordinator of the Red Nacional de Mujeres en Defensa de la Madre Tierra (National Network of Women Defending Mother Earth—RENAMAT) in Bolivia, a network of indigenous women and women farmers from communities affected by mining activities whose territories have been destroyed by pollution.

“We compare ourselves to her because Mother Earth bears fruits and we give life. We live in her. The laws passed by our government are violating Mother Earth’s rights and she has no voice. That is why we, women, have put ourselves on the frontline to defend Mother Earth, especially water,” says Margarita.

RENAMAT was created in 2013 by women who had participated in a pilot school on environmental conflicts and gender justice organized by Colectivo CASA. “At the end of 2013, the empowered women decided to organize as a network and formed RENAMAT, because they felt supported and united in the same fight,” says Angela Cuenca, the Coordinator of Colectivo CASA.

“We have identified this type of violence against indigenous women as environmental violence because we have seen that our foremost right in our political constitution is being violated: the right to life,” states Margarita.

Environmental Violence against Women is a term developed by the women of RENAMAT which means: “all action or omission caused by people that, by damaging the environment, prevents o restricts the exercise of women’s rights and, in turn, harms their quality of life, integrity, health, economy, work, heritage, and cultural identity.”

Through the creation of a booklet, RENAMAT works with indigenous women from different communities, strengthening their capacities on environmental violence and women’s rights. In this booklet, they explain what this type of violence is about and how it can be identified. It also lists the rights of women in general, according to the Political Constitution of Bolivia, and those that are specific to indigenous women.

According to the booklet “denying women their rights is also violence because all rights are interconnected to guarantee the main right, which is the right to life.” By denying women, for example, their right to water, their rights to health, work, food and food sovereignty are also being violated.

The texts in the booklet come accompanied with illustrations that show the different situations that indigenous women experience when mining projects arrive in their territories. “We have created these booklets because many sisters can neither read nor write. The drawings are attractive to them; they stay in their memories. That is why we are taking these booklets to all communities, to be able to show how we work and how our rights are being violated,” says Margarita.

“When we conduct seminars, we tell the women to draw what their territory is like, where are their water sources, and the sisters who don’t know how to read or write make a great effort and they depict it, what their territory was like before and what it is like now,” Margarita says.

The work of RENAMAT entails visiting different indigenous communities that still haven’t been affected by mining companies. Through workshops, talks, video presentations and other activities, they share the realities of women who have already lost their territory and water sources due to pollution, with the aim of empowering women to become Mother Earth’s defenders.

A fight that belongs to all of us

The road hasn’t been easy. Their work has been questioned by different authorities; they have been defamed by those who say they “are being paid”. Furthermore, a new mining law is being promoted by the current government which eliminates the process of consulting and informing the communities about mining projects.

Margarita says she feels disillusioned as she had trusted that an indigenous president would worry about his brothers and sisters. “Our political leaders are very capitalists and extractivists. They only think about their present; they don’t think about the future like we do. We think about what we are going to leave our children and our grandchildren… devastated lands, dry lands.”

In spite of these obstacles, RENAMAT continues their work defending Mother Earth and invites women all over the world to join the fight, which is everyone’s fight. “Now we are weaving networks of solidarity and action to defend Mother Earth. Women in Latin American have to be very strong as their rights are also being abused by the extractives industry. They shouldn’t feel alone, RENAMAT is here to support them as they go forward defending Mother Earth’s rights and the right to water,” concludes Margarita.