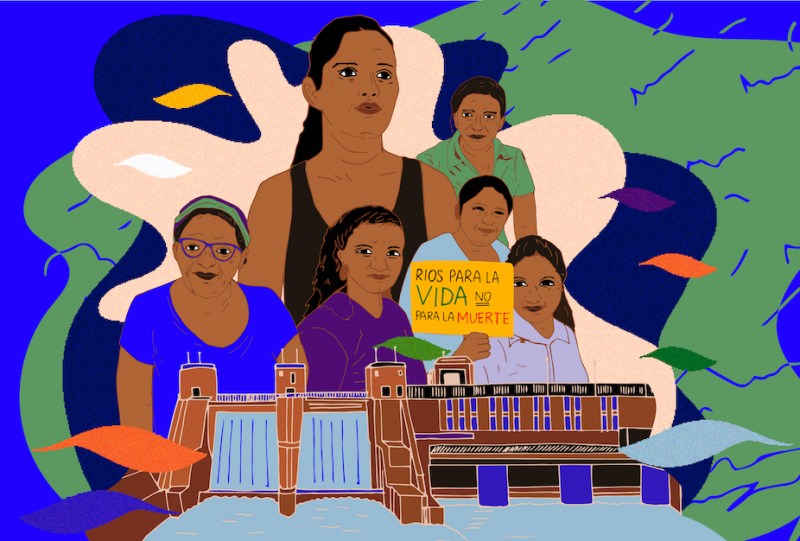 Residents of Honduras’ Sula Valley saw water rise to the roofs of their houses last November. This northwestern region of the country, already strongly affected by the pandemic, was devastated by floods caused by Hurricanes Eta and Iota making landfall within two weeks of each other.

According to research, it is the first time on record that two cyclones have hit Honduras in the same season. Eta and Iota left at least 94 people dead, at least half a million internally displaced, and almost 4 million affected in Honduras. According to analysts, the impact of the cyclones could take the country’s poverty rate up to 80 percent in 2021.

The Sula Valley hosts two of Honduras’ most important river basins, leaving the area particularly vulnerable to flooding. This part of the country has also historically been the heart of transnational extractive activity in Honduras and the heart of strong resistance. Since 2018, the government has registered 157 hydroelectric plants, with the majority in the departments of Cortés and Santa Bárbara where the Sula Valley lies.

Betty Vásquez Rivera, an Indigenous Lenca, feminist and coordinator of the Santa Barbarense Environmental Movement (MAS) of Women for Life, said the state’s promotion of an economic model that is unsustainable, polluting and extractive, has made the Sula Valley a territory even more vulnerable to natural disasters caused by climate change.

“At least in Santa Bárbara alone there are more than 31 large hydroelectric projects,” said Vásquez. “When we talk about four hydroelectric projects that are going to produce 150 megawatts more of energy, we talk about more than 15 municipalities in Santa Bárbara that will be affected by displacement, evictions, loss of productive areas, loss of roads, territories, etc. Serious things are coming to us.”

“To mitigate everything that has happened in the Sula Valley, the construction of dams is not a solution,” said Vásquez. “I made a tour of some communities that are going to be affected by the dams and people have told me: ´We are concerned that they will displace us, we do not know what will happen in 2021, we are concerned that they will come to install a project and not respect the right to consultation or consent.’ It is an uncertainty that we live with. Private companies do not care what people are thinking, because we are going to face a failed state that does not respect voices and resistance.”

Vásquez believes reconstruction; relocation of communities, centers and towns; and recovering the economy need to happen in Sula Valley. “Here around 150,000 quintals [15 million kilos] of coffee were destroyed and nobody talks about recovering and reactivating these agricultural zones. Here there are communities that have been 100% displaced because they’re no longer habitable, there is no water sanitation. Such big structural problems are not going to be solved with the construction of hydroelectric projects.”

The impact of extractivism on women

The construction of these mega projects has great repercussions for women, since they are the ones who manage the food and water for their families. According to Vásquez, the construction of hydroelectric plants would directly affect the bodies and lives of women. “For example, water is going to be limited and women are going to have to carry water from other places. Forced migration will increase and with it many women leave and leave the communities with their children, creating a situation of vulnerability and risk for them.”

“Extractive projects specifically impact indigenous peoples since these projects violate their right to self-determination, to their ancestral practices and to live in a healthy environment,” said Vásquez. “In the same way women are impacted since extractivism, apart from generating dispossession and displacement, commercializes access to land under equal conditions and land/heritage assets from the logic of patriarchy, and where women do not make decisions about their lands, their houses, because companies are always talking about property owners referring to men and at no time do they consult women or refer to them as owners of those territories, of the water, of the animals, of the seeds.”

Creating a fabric of solidarity

Faced with the negative impacts of megaprojects encroaching on their territories, the pandemic, and two devastating cyclones, the women of MAS have had to find ways to keep going. As their resistance to these megaprojects continue, they are also prioritizing collective care to build resilience.

With the support of Fondo Centroamericano de Mujeres, the lead organization of the Global Alliance for Green and Gender Action, they were able to practice an ancestral tradition of the Lenca people called Guancasco de las Semillas. Together, they established a native seed exchange system where grains and seeds were moving from one community to another without the use of money. Even in times of pandemic and confinement, communities were able to grow their own vegetables like corn and beans. Ninety percent of the people who participated managed to harvest and store their vegetables, securing food for the year.

For Vásquez, supporting each other between the communities was like creating a fabric of solidarity and humanitarian support. “It was beautiful to see how compañeras sent their beans or corn to other communities that had lost everything and were affected. The corn that was produced in Santa Bárbara traveled to neighborhoods in Tegucigalpa. This community experience gives strength and energy, within a vulnerable environmental context.”

Together, they were able to build hope and other forms of resistance and defense, not only against the corporate projects, but also in the defense of their Indigenous seeds and customs — all the ancestral practices that they had stopped as a result of the current economic system.

They have also run a radio campaign encouraging listeners to not let the pandemic take away their hope, to encourage collective support, and call out the corruption of the government who are taking resources that were approved for the prevention and response to COVID-19.

The defenders of MAS, including Vásquez, already face criminalization, harassment, threats and attacks, as well as smear campaigns for their open resistance to extractive projects. Twenty percent of Honduras’ mining and energy concessions are in Indigenous and black territories, increasing conflict in a country considered one of the most dangerous in the world for the defense of the environment.

Despite this, Vásquez said the group will continue to exercise the right to association and assembly because the extractive companies have not stopped their operations nor has the government stopped granting concessions.

The Santa Barbarense Environmental Movement (MAS) of Women for Life is a grantee of Fondo Centroamericano de Mujeres, who is the lead organization of the Global Alliance for Green and Gender Action. The group formed in 2011 to build community resistance against mining and then expanded their activities to cover the overall defense and protection of natural and common goods in the department of Santa Bárbara. The group is mainly made up of women who influence the defense of the territory, land and body, against extractivism and patriarchy. You can follow their work on their Facebook page.