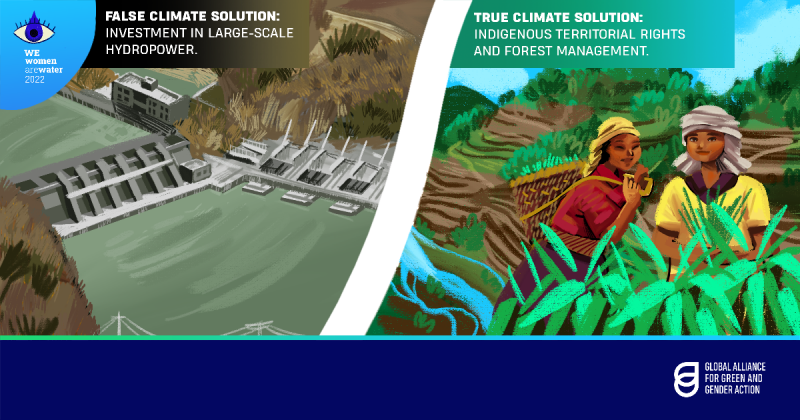 Long story short: International financial institutions such as the Asian Development Bank and European Investment Bank continue to invest in the false climate solution of large-scale hydropower, which often displaces local communities and is a significant source of greenhouse gases. These institutions must shift their resources towards the true, gender-just climate solutions of Indigenous territorial rights and forest management.

The Magar Indigenous community in Nepal is highly dependent on the Seti river for its livelihoods. However, the 140 MW Tanahu hydropower project is expected to affect almost 800 households along the river, threatening the loss of the community’s homes and access to resources. It is estimated that 60% of the residents will lose farmland.

Renewable energy is considered an “important development priority” in Nepal’s constitution, with hydropower seen as a key to economic growth. At the time of project approval the Asian Development Bank (ADB), which co-funds the project with the European Investment Bank (EIB) and Japan International Cooperation Agency (JICA), called the dam necessary to expand access to clean and sustainable energy because it addresses low electrification rates and aims to overcome shortages in energy supply.

However, this rush to adopt large-scale hydropower comes at a very high cost: the violation of lndigenous rights. A survey by International Accountability Project, Indigenous Women’s Legal Awareness Group (INWOLAG) and Community Empowerment and Social Justice Foundation found that 75% of local residents were not consulted, and 80% did not get compensation. The affected communities will lose over 72,000 hectares of residential and private lands, more than 11,000 trees, nine cremation sites and various kinds of public infrastructure.

For generations the Magar community’s strong link to their territories and river have formed their identity and a cultural belief system based on a symbiotic relationship with nature, where communities only take what they need. The river ecosystem plays both a significant role in the lives of the Magar people and, when free-flowing, in trapping carbon. While large dam reservoirs are portrayed as a climate solution because they reduce reliance on fossil fuels, they are actually a globally significant source of the greenhouse gas methane and are uniquely vulnerable to floods and droughts, raising the risk of dam failures during floods and power outages when reservoirs run dry.

The Magar community have carried and passed on traditional ecological knowledge related to collective forest and river conservation for generations, ensuring a mutually beneficial relationship with their land. The planting of broom grass (also known as tiger grass) is an example; the women of the community plant it along steep hills and sandy banks to prevent soil erosion and landslides, retaining soil moisture and nutrients to regrow vegetation as well as improving water quality and quantity.

The women of the community hold Indigenous knowledge about medicinal plants, edible wild vegetables, water resource management, weather forecasting, and the agricultural cycle linked to the weather. Removing Indigenous communities from their land and resources would impact their ability to pass down this knowledge to future generations in order to mitigate and adapt to the climate crisis. ​​Forests — and as a result, water — do better when Indigenous land rights are respected, with lower deforestation rates and carbon emissions.

INWOLAG was established by women lawyers from Nepal’s Indigenous community and provides advocacy, livelihood support and legal services to survivors of gender-based violence. In 2015 INWOLAG became aware of how the Magar Indigenous community will be affected by the Tanahu hydropower project and started raising awareness of the project’s negative impacts. INWOLAG builds the capacity of the community and local women so they can advocate for the community’s rights. It also supports the community in filing complaints with independent watchdogs of the ADB and EIB. INWOLAG is a grantee partner of the women’s funds Tewa and Mama Cash, which are both part of the Global Alliance for Green and Gender Action. You can follow INWOLAG’s work here and find out more in the links below.