The women of Bomboré “simply do not want a mine” 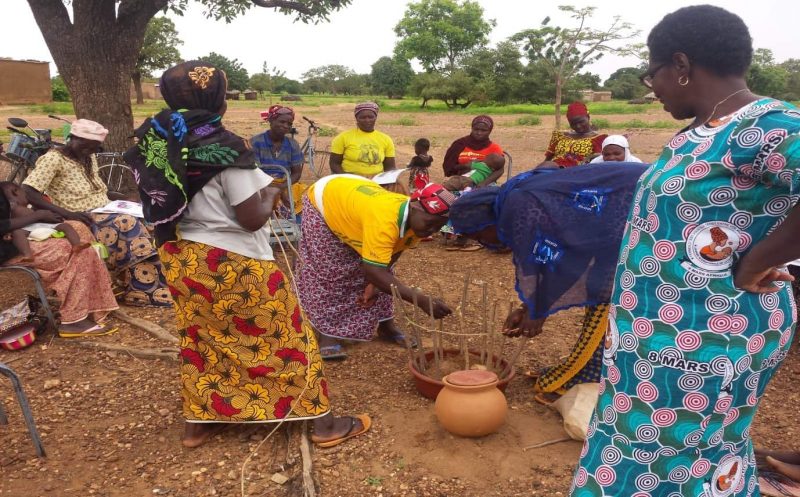 Sixteen years ago in Burkina Faso, mining industries didn’t exist; the first big mining project, which was operated by the state, closed down in 1994 due to administrative problems. It wasn’t until 2003, when a new mining code was approved, that different investors in the extractives industry became attracted to the potential of the African country. Shortly thereafter, mining exploration activities began in the territory, and mining concessions were granted by the government in different zones.

This is how, in mid-2016, the Canadian company Orezone Gold Corporation arrived at the town of Bomboré in the Ganzourgou province. This region is a semiarid area that only gets three months of rain and remains dry for the rest of the year. The communities of the town of Bomboré are farmers who supplement their income by carrying out artisanal gold mining—this is especially true of the women.

The mining activity has not started. It is expected to begin in 2020, but the agreement for mining exploration has already been signed with the Ministry of Mines of Burkina Faso.

In general terms, the mining project in Bomboré would affect around 700 hectares of land; 75,000 trees would be destroyed; 609 families would be affected and some would be relocated; and 3,500 people that practice artisanal mining have already begun losing their source of income, given that they have been prohibited from continuing this activity due to the project [according to figures from Organisation pour le Renforcement des Capacités de Developpement (ORCADE)].

Furthermore, the Nobsin River, which is the community’s main water source, is in danger of being polluted. The project is set to last 13 years; however, it could be more.

The Canadian company tells them they will be compensated and relocated to another territory but “can these compensations really replace what these communities are losing when they have to abandon their villages of birth?” questions Odette Toe Napina, Project Leader of ORCADE.

ORCADE, the first NGO against extractives in Burkina Faso

Since its creation, ORCADE has monitored the work of mining projects and the socio-economic and environmental impacts of the extractives industry in Burkina Faso. It is a member of the Steering Committee of the Extractives Industry Transparency Initiative (EITI), which brings together the government, the mining companies and the civil society.

From 2014 to 2015, ORCADE led, together with other civil society organizations, a campaign to revise the mining code of 2003; create a fund to improve the living conditions of those communities in the mining area; and have stricter regulations to protect the environment from the effects of mining.

This campaign led to revision of the 2003 mining code through the implementation of a new mining code in 2015 that created a fund for the communities in the mining areas, stipulated stricter regulations to protect the environment, and stated the official recognition of artisanal gold extraction, which wasn’t recognized before.

“ORCADE is the first NGO in Burkina Faso that has participated in the mining sector. It is now recognized as a leading NGO in this sector,” Odette mentions.

“The women didn’t know anything about the mining sector before we arrived,” Odette says. Through capacity building workshops, they have worked so that women can get a better understanding about how the extractives industry works and what they can expect when a mine is set up in their community. They also discuss the impacts of mining on the environment and on women and their socio-economic conditions, as well as the mining code and Free, Prior and Informed Consent (FPIC).

At the same time, women are being provided with trainings on women’s rights because they did not talk about this before; they didn’t know they also had rights. By providing knowledge about their capacities and skills, the women of Bomboré have changed, gained confidence, are more conscious about what they want and what they don’t want and now feel they can raise their voices, even in meetings where men are present. “We will see more changes as the work advances,” continues Odette.

The women now expect their problems to be considered more. They used to participate in activities that generated enough income to support themselves, and now this has been lost. They also want to be taken into account in decision-making processes about their communities. “Basically, the women do not want to have a mine in their community,” says Odette.

Through organizational work and the strengthening of leadership skills, the women of Bomboré have compelled Orezone Gold Corporation’s mining project to take some of their demands into consideration. The most important change is that the company will now provide those that are relocated with a financial stipend, especially the women. It is also expected they will receive accompaniment to train for other jobs.

“We will continue developing the capacities of the communities to determine if the mine is an opportunity for them or not. We will not make these calls for the communities; we are here to support them,” affirms Odette. For their part, ORCADE will continue meeting with officials, mining company owners and the authorities responsible for the project in Bomboré to make them understand what the position of the communities is in relation to their projects.