Vice Versa: What do you smell? Life! 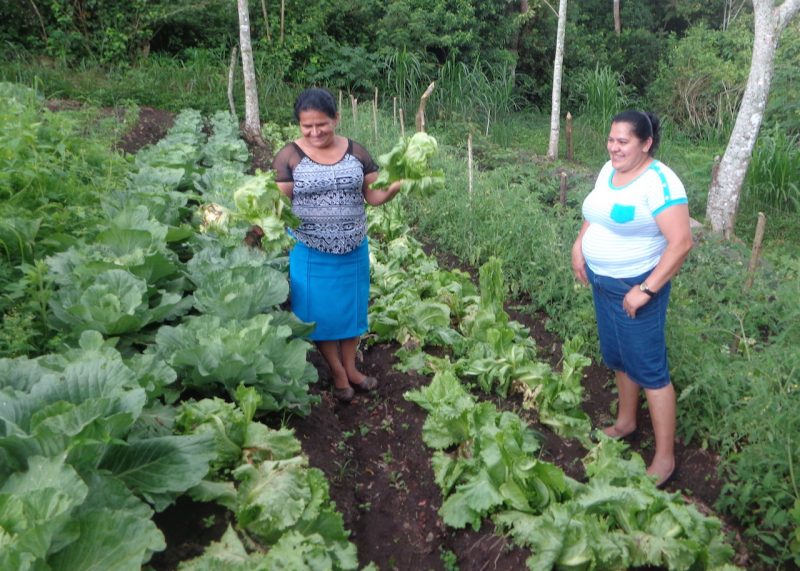 A better environment starts with local women’s groups, as is shown by the ecological oasis of the Fundación Entre Mujeres (FEM) in Nicaragua. And vice versa. The analog food forest restores the land and gives women in rural areas control of body, life and wallet. “Nature gives us strength so that we become like the strong trees you see from the sky, on our own patches of land.”

Suppose you ignore the coronavirus and take a flight over the tropical isthmus that connects North and South America. Then from the air, you can see a dry strip of land that runs from southern Mexico to Panama, via Guatemala, El Salvador, Honduras and Nicaragua. This is the Dry Corridor. Here, El Niño provides a devilish combination of extreme drought and rainfall.

Its impact differs for women and men. Women have to walk longer to fetch water, are unable to prepare enough food for their families, are often financially dependent on their husbands, and are unable to make decisions about land because they do not own it. This reality causes dependency and vulnerability.

The plane flies over the border of Honduras and you see the high mountains in northwestern Nicaragua. The once fertile volcanic soil is withered and exhausted after decades of monoculture of mainly tobacco plants and maize. The pesticides pollute the air and water.

But when the plane flies a little lower, you’ll suddenly see large swaths of forest in the distance — around the Estelí region — sprouting like green mushrooms from the ground. A brave woman with jet-black hair waves to you from the ground with a smile. She gestures you to land; she wants to show you something.

She introduces herself as Luz Marina Valle, a 32-year-old campesina feminista. Although women have the same right to property as men, they globally manage less than 20 percent of the land area. While managing land provides economic autonomy, food security and a protective foundation for a dignified life. Women like Valle see what happens when they take care of the ground. She takes you by the hand and walks forward into her green oasis.

She says that it is also not self-evident in Nicaragua that you own land as a woman. “That was true of my great-grandmother, my grandmother and my mother. But, like four hundred other women, I received a piece of land in 2006 from the Fundación Entre Mujeres (FEM), a women’s movement and NGO from the region. I am very proud!”

FEM wants to improve the position of rural women like Luz Marina Valle by giving them land rights and food security, and uniting the women in cooperatives so that they can operate as a collective force. Through workshops and lectures, the women learn about feminism, their sexual and reproductive rights, and taking care of each other’s safety — femicide is still a huge problem in Nicaragua.

They are educated and trained to make their voices heard with the local authorities so that, at the governance level, it is not spoken about them, but rather by them. The rural women are united in La Central Cooperativa Las Diosas, or the Cooperative of the Goddesses in English, which enables them to grow and market organic coffee, honey and hibiscus as a collective. And the vice president? That’s Valle.

“The fact that I now manage land feels like a centuries-long system of inequality has been broken. I can now grow my own food. Not in the colonial way, where I exploit and exhaust the ground, but in a spiritual-ecological way. I can restore the historical connection that we indigenous women have with the earth; her health is mine too.”

As the land of Valle flourishes and is in full bloom, she also regains control over her own body and life. Because she now has financial autonomy, enough healthy food and she feels a sense of solidarity with the other women who are affiliated with FEM.

“My land is not that big, 3,656 square meters, but come: I’ll show you.” She briskly walks through a multidimensional labyrinth of a hundred shades of green. “Bienvenido to my green ecosystem. Close your eyes and take a deep breath through your nose. What do you smell then? Life! And do you hear the water splashing further on? I feel connected to the earth here.”

Parts of her land are lovingly embraced by giant mahogany trees that provide shade and moisture. Butterflies flutter. The soil is covered with smaller plants and herbs with deep roots, which supply the soil with nitrogen and keep the soil fertile and vital.

Bamboo is planted close to the stream because the roots of bamboo keep the soil strong. Various vegetables, including corn, pumpkin, hibiscus and bean plants grow near the broad plane and banana trees. Birds chirp. She shows several true Nicaraguan fruits such as guava, the pear-shaped guayaba and sweet white tiguilote.

It cost her and the women of FEM a lot of energy, but this agroecological system with a feminist perspective is increasingly self-sustaining. By applying analog forestry, the soil restores and biodiversity increases.

“The beauty of analog forestry is that a forest in its natural state is mimicked,” says Isabel McDonald, director of the International Analog Forestry Network (IAFN, supported by Both ENDS), from her office in the Costa Rican capital San José. The collaboration between FEM and IAFN is, in fact, a cross-fertilisation between women’s and environmental issues. Vision: if you give women the knowledge to restore degraded land, you ensure that both women and nature flourish.

“Analog forestry,” says McDonald, “consists of a 12-step model that anyone can implement. It is a powerful weapon against climate change because it prevents deforestation, restores soils and increases biodiversity.” She herself was born in Haiti and travelled with her family throughout South America — and now she lives in Costa Rica.

Her father had a love for trees, which he passed on to his daughter. In the 1980s, she was already involved in reforestation projects in Nicaragua and then she came into contact with analog forestry. Working for IAFN is “a dream,” she says. IAFN has invested in training centres and now works with 40 trainers who teach analog forestry workshops around the world to women’s groups such as FEM.

McDonald explains the principle: “The basis of analog forests is that you first look for a natural forest, as close as possible to the area of land you want to transform. In the forest, you will map the different layers, from the tops of the highest trees to the roots of the ground covers. In 12 steps you investigate the different types of cover and the stages of growth of the forest. Then you imitate it on the plot of land you want to transform.”

The technique of analog forestry is specifically aimed at the communities living in the area being restored and takes into account their contributions and needs. Valle and her women’s group now have enough food, a source of income, fodder for their livestock and herbs and medication. Combined with her spiritual outlook on nature and the training on gender and empowerment she receives from FEM, Valle now proudly calls herself a “campesina feminista.”

According to Valle, the green revolution she planted is now so desperately needed to restore the bond between women and the earth. “Women give life, just like Mother Earth. If the earth is healthy, then we are spiritually, physically and mentally healthy, too.”

She views “feminist and anti-colonial farming,” as she calls it, as rubbing salt into the wounds of a devastating capitalist system. “Being environmentally responsible with our nature,” she says, “creates more gender equality and economic justice. In fact, we are rebelling against a materialistic system of exploitation by building ourselves a system based on respect and harmony.”

Luz Marina Valle received training in analog forest management from Adriana Pál, who is affiliated with IAFN. Sitting in a rocking chair in her own backyard — which looks like a jungle, including vines — in San José, she talks passionately about her love for the forest.

“At the beginning of the course,” says Pál, “I keep telling the women: ‘After this, you will never look at a tree through the same eyes again.’ And that prediction always comes true!” she laughs. “People look at a tree and see wood that can be sold. But you throw dead wood in the heater and it is gone.”

“While a tree provides air, shade, food, fertile soil, coolness and protection, sometimes for hundreds of years. Trees are so massive and resilient, that they can be hit by lightning, but just stay put.” Already at the age of three, Pál was constantly drawing trees, something she is now doing with her three-year-old son.

The contact with Valle was inspiring for Pál. “She really is a force of nature! When I think of her, I see the kapok tree: the sacred Mayan tree that can grow to a height of seventy meters. To the Mayan people, it was a symbol of the universe, it was a symbol of strength.”

Actually, Pál and Valle were scheduled to meet this summer in El Salvador, where a handful of selected women were to be trained as female promoters of analog forest management so that they would pass the lessons on to other women in the community. Due to COVID-19, classes are now taught online.

The compañeras Isabel McDonald, Adriana Pál and Luz Marina Valle do not let themselves be discouraged by coronavirus. On the contrary, a sense of momentum has emerged, says McDonald: “You see people all over the world wanting to grow their own healthy food. Women are often denied the right to food security, water and a clean and safe living environment. By putting them at the helm of ecological restoration, you give them those rights.”

Valle adds: “We, the feministas campesinas, want to restore the lungs of the Earth. We know that we need nature in order to survive, instead of the other way around. She empowers us women so that we become like the strong trees that you see from the air on our own plots of land.”