We, Women are Water 2020: The Guapinol women challenging mining extractivism 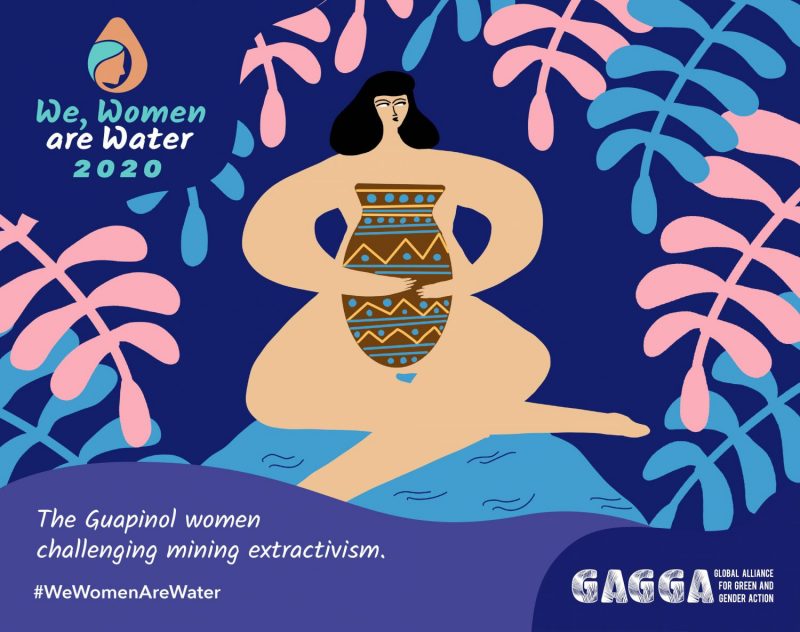 The region of Colón in Honduras hosts 11 percent of the country’s mining concessions. At the beginning of 2012, the Honduran government decided to create the Montaña de Botaderos National Park in the Guapinol region. Numerous river courses begin in this area, including the Guapinol River, which supplies water to the community of the same name.

One year after the creation of the national park, the Honduran company EMCO Mining Company — which now trades under the name “Inversiones Los Pinares” — applied for a concession for an iron oxide mine in the area. Its request was authorized by the government of Juan Orlando Hernández after reducing the size of the national park. Mining exploration activities started and a processing plant was constructed, causing the first damage to the natural assets of the area, and in particular, affecting the health of the water ecosystem.

Since then, the Municipal Committee for the Defense of Common and Public Goods, made up of community residents, local associations of “campesino” rural workers and the Catholic community, have been leading a resistance movement against the project. In 2018 they began implementing strategies to defend the land from the extractive project, including community mobilization, public complaints and legal action; citing in their arguments all the irregularities that occurred in the procedures of granting the concession and the mining exploration, the failure to conduct a free and informed prior consultation required by Convention 169 of the International Labour Organization (ILO) and the absence of an approach aimed at preserving human and environmental rights.

At the end of August of the same year, they staged a resistance encampment for 88 days, which ended in violent eviction through a police and military operation. This began a campaign of persecution against the community leaders, including threats and attempts to discredit the women leaders. Seventy percent of the participants in the camp were women.

To date, two land defenders have been assassinated. Thirty-two people have been criminalized for defending the land – of these eight are in prison accused of crimes they did not commit, and the remaining 24 have arrest warrants against them and are in exile away from the community and in some cases, outside the country.

Since then, it has been mainly women who have sustained the resistance movement, although they have not received public recognition as environmental defenders. They have taken up the defense of their lands, following through the legal and judicial processes, assuming leadership and speaking out against the mining project in various political spaces, as well as organizing and participating in decision-making spaces.

Evidence has been collected to show the situation of the land defenders deprived of their liberty, and complaints have been filed with the National Human Rights Commission and the Office of the Secretary for Human Rights for violation of due process, demonstrating the illegal acts committed against those who have been detained.

The women are demanding that this extractive project stop – and they are also asking for recognition of the role that they have taken on as defenders of the public common goods of Guapinol, especially since their fellow community members were imprisoned. This has increased their responsibilities towards their families, community and society, which they continue to uphold. They are also demanding that the harassment cease and that they be allowed to exercise their right to assemble – a civil and political right that has been constantly questioned and violated, both before and after the eviction.