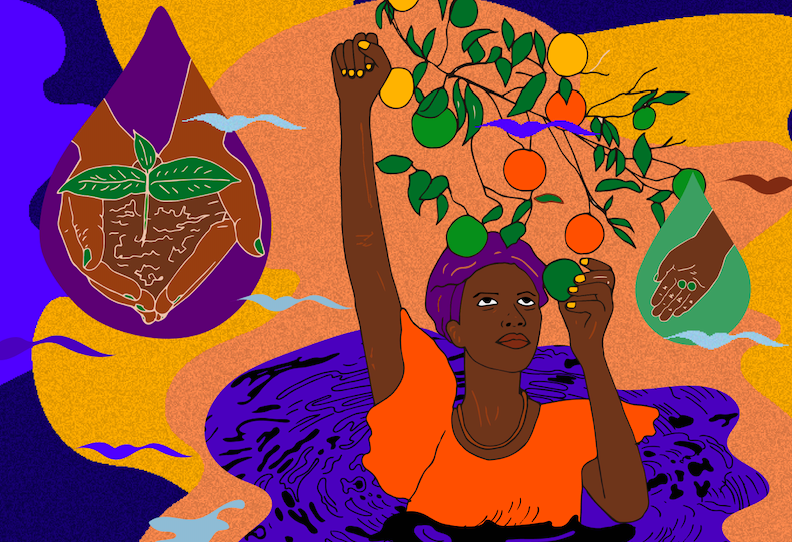 In the Niger Delta’s Yorla Oil Field, the farming and fishing community of Yaataah have seen their water become increasingly polluted. Decades ago, they would soak their cassava tubers in the Yaataah River for days to ferment them before processing the cassava into their staple food. The local Kwawa women were renowned potters, earning their income from molding clay from the river into traditional pots for dance, herbs, drinks and cooking.

Depending on the nature of the tide, the fisherfolk of Yaataah used to walk through the river and cast their nets into the water to catch fish. Now, they have to hire boats to go fishing in the high seas, risking their lives to tidal waves and sea pirates. The water these days is also too contaminated with petroleum hydrocarbon to process their cassava or make their clay pots, and the river banks are strewn with the remains of fish and crab carcasses.

In areas of the Niger Delta where mangrove forests have disappeared due to the toxicity of oil spills, they are being replaced by nipa palms — a foreign species introduced over a century ago. Over the past four decades, nipa palms have invaded the Yaataah River, destroying the indigenous mangroves in the area which served as a crucial breeding habitat for fish and crustaceans, and carbon sink for the environment. This made life even more difficult for women whose livelihoods depend on the hunting and selling of West African Mud Creeper.

The Niger Delta is the third largest mangrove forest in the world and its mangroves are important nature-based solutions to the climate change crisis. They store carbon four times more than traditional rainforests, serve as shoreline protection against floods and storms with their dense root systems, prevent erosion, and maintain water quality and clarity. They are a hub for biodiversity all while providing various economic benefits. However, mangroves may disappear completely from the Niger Delta in the next 50 years if nipa palms continue to quickly multiply and oil spills remain an issue.

Lokiaka Centre has been carrying out campaigns targeting Shell and the Nigerian government, with GAGGA’s support, to provide potable water in communities as it’s their human right. The organization, along with other environmental actors, is pushing Shell and their government to fully implement the UN Environment Programme’s recommendations from a report from 2011 to clean, remediate and restore the Ogoni environment.

The report revealed that drinking water from wells in local communities was contaminated with benzene, a known carcinogen, at levels over 900 times above the World Health Organization guideline. The UNEP report also identified eight emergency measures and recommended that they should be given urgent attention to address high risk issues such as the provision of potable drinking water. A decade later the government has yet to provide this, even as they request their citizens to wash their hands regularly with clean water to prevent the spread of COVID-19.

In January 2021, a Dutch appeals court ordered Shell’s Nigerian subsidiary to compensate farmers in two villages in the Niger Delta for damage to their land caused by oil leaks in 2004 and 2005. This decision creates legal grounds for communities to take on the multinationals who do them harm, and it could open the gates to many litigations against oil companies that have been operating in Nigeria.

The Lokiaka Community Development Centre is a local partner of Both ENDS, Global Greengrants Fund and Mama Cash, who are all part of the Global Alliance for Green and Gender Action. Established in 2009, it is a self-led organisation working for and with Indigenous women farmers and human rights activists from the Niger Delta. The group provides advocacy training and engages in campaigning, alliance building and knowledge exchange to secure Indigenous women’s land rights and ensure that women are seen as important stakeholders in decision-making related to the land and environment. You can follow their work here.