During the month of March, organizations in Latin America, part of the Global Alliance for Green and Gender Action (GAGGA) joined forces once again to launch the campaign “Las Mujeres Somos Agua” (We, Women, are Water), which aimed to highlight the role of women in the region have when defending their water, the specific impacts that they suffer due to the disappearance and contamination of their water sources, as well as how to support their work in the management of and decision-making on the use of this common good.

Between the 8th of March, International Women´s Day ,and the 22nd of March, World Water Day, we shared, through different social mediums, post cards with messages linked to women and the human right to water. Also, women´s organizations from the region joined the campaign and shared their stories told from their realities, stories of struggles, demands and alternatives built from their territories.

The campaign “We, Women, are Water” ended with an online panel of Latin American women water defenders, who spoke of their experiences in organizing themselves and their actions, what their demands were, and how women respond and have become protagonists in the collective struggle to defend water. More than 200 people participated in this activity, in which we had the opportunity to exchange our different visions, knowledge and ideas about the role of women defending their territories in our countries.

Below are the postcards shared via social networks with the hashtag #LasMujeresSomosAgua.

To view the recording of the online panel (only in Spanish), please click here. 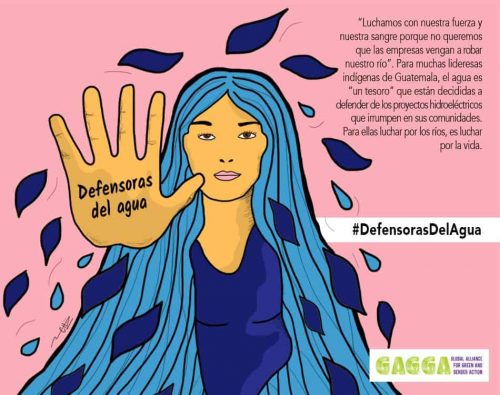