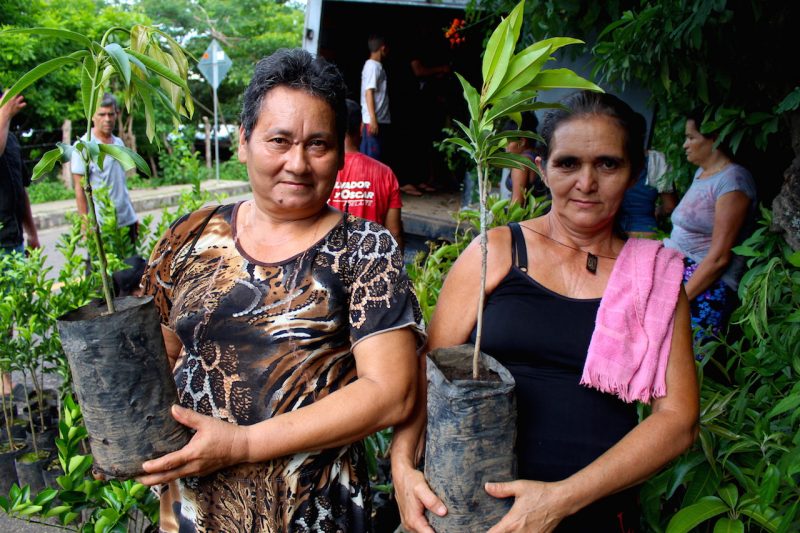 When Olga Serrano was growing up in El Salvador, farmers could expect seasonal rains to pour every year from May until September. But in recent years, sudden and intense rainfalls outside the monsoon season and prolonged drought have devastated maize and bean crops, leaving farmers — particularly women — struggling to put food on the table.

This is an experience that women from the Asociación de Lisiados de Guerra de El Salvador (Association of the War-Disabled of El Salvador or ALGES for short) are all too familiar with. Olga Serrano, the executive director of ALGES, said this causes a cycle of losses; farmers who lose their harvest need to borrow money to be able to plant again, but then lose their crops the next year due to increasingly extreme weather. This has contributed to large numbers of mainly male migrants leaving the country, increasing women’s responsibilities for the family’s livelihood and care.

ALGES was created to ensure that the rights of  people disabled by the war are upheld under a law that guarantees them economic compensation, health services and items that support physical rehabilitation. Since 2019, GAGGA’s lead organization Fondo Centroamericano de Mujeres (FCAM) has supported ALGES to strengthen the association’s political advocacy efforts as well as women’s leadership in local organizational structures.

The women of ALGES have navigated many hardships — as soldiers in the Salvadoran Civil War and as advocates and demonstrators struggling for the rights that have been denied to them. But for the past several years they’ve had to face a different challenge: climate change and its impact on their communities.

The Dry Corridor, a stretch of tropical dry forest spanning from Mexico to Panama, is one of the regions in the world most vulnerable to disasters resulting from climate change. This area is characterized by irregular rainfall patterns, where five years of recurring floods followed by months-long drought have impacted the food security of 2.2 million people. The Dry Corridor almost completely blankets El Salvador, which is already considered the most water-stressed nation in Central America. It’s in these drought-prone areas where ALGES has been supporting people disabled from the country’s civil war for the last 23 years.

For ALGES women organizing is key

As part of the peace accords that ended the 12-year war, the government distributed land to ex-combatants. Despite this, 92 percent of El Salvador’s veterans with disabilities live in poor conditions in rural zones, most of which are vulnerable to extreme weather.

The reinsertion programs aimed to reintegrate veterans into society generally failed to consider the specific needs of women and child combatants, and particularly of women heads of households. These women faced discrimination when it came to land access and credit at the local level, and reported having more problems getting assistance for productive activities than men.

Unable to survive on the small pensions they receive from the government and with limited job prospects, many women veterans work to grow maize and bean crops. Over time as they experienced the loss of their crops and livelihoods due to the effects of climate change, they had to look for alternatives to feed their families and make a living.

“Over time we found that we women had to organize ourselves,” said Olga. “Women with disabilities have different and additional needs than other women. We had to learn how to survive by creating other sources of income and this is how we started learning different ways of doing things. Organizing is the secret to survival and this is why when we encounter difficulties we immediately connect with one another.”

One of ALGES’ solutions is training their members to grow gardens with small irrigation systems and make organic fertilizers to produce food for both household consumption and to sell. In El Salvador, it’s traditionally believed that only men can apply crop science, but at ALGES it’s the women who are attending these training sessions.

The women of ALGES participated in knowledge and experiential exchanges with groups in neighboring countries to learn about how they practice organic agriculture. Since preparing fertilizer requires a lot of physical strength for shoveling organic materials, the women were also trained to use plowing machinery that has saved time and energy, and made it possible for more  women disabled by the war to get involved.

In their backyards you can find a diverse collection of organic tomatoes, cabbage, chili and cucumbers next to mango and avocado saplings. The women are trying to adapt by learning about climate-resilient crops that can tolerate environmental stresses like excessive rainfall or lack of water. If it rains in November and December, they adjust and plant the appropriate crops that require a lot of water and can mature in a short period of time.

“Just because you are missing a leg, arm or are blind doesn’t mean you can’t be active and contribute,” said Olga. “We are not beggars, we are people with great skills and capacity to contribute to the development of our country and wellbeing of the population — particularly those most in need — and we have shown that. We are women with abilities, with abilities to have impact on national policies, and we can only do that if we’re organized.”

Bouncing back from the pandemic

ALGES also recently purchased a farm so they could make organic fertilizer at a bigger scale and grow crops that require more land like coffee, cacao beans, plantains and citric fruits. Uphill there’s a water reservoir used for fish farming and irrigation during dry season.

Before the pandemic, ALGES planned to use the farm as an ecotourism site where their members could serve as guides. But as with the rest of the world, the association has had to adjust. Instead of in-person trainings, they’ve prepared documents to distribute to community leaders with guidelines on how to effectively grow organic produce.

Compounding the effects of the pandemic was the destruction left by two storms in May and June, namely Tropical Storm Amanda which was considered El Salvador’s most devastating weather disaster in 22 years and directly affected 150,000 people.  In this context, ALGES received a grant from GAGGA’s Autonomy and Resilience Fund*, which enabled its women members to continue their training, plant seeds and make fertilizer to plant their crops and retain food sovereignty.

Olga said the effects of COVID-19 and climate change have contributed to greater levels of poverty and unemployment among the women of ALGES, but with their history and experience they’ve been able to bounce back pretty quickly.

“We have been strengthened through work with our organization,” said Olga. “We should not despair. We’re working together, we’re supporting one another and we continue to do so and continue onwards because otherwise it’s going to be very tough.”

*The GAGGA Autonomy and Resilience Fund was set up to support the urgent needs of women environmental defenders and their communities during the pandemic, aimed at strengthening actions that build their community-driven systems of resilience and autonomy. It was made available to current and past grassroots grantees of partner women’s and environmental funds, as well as current GAGGA-supported NGOs and received applications on a rolling basis until July 15th, 2020.

The above featured image is from ALGES.