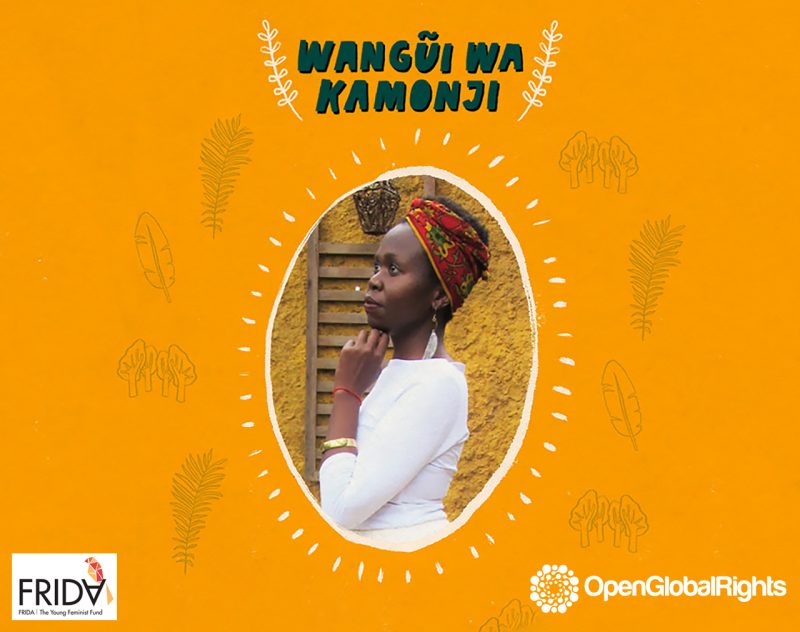 Wangũi wa Kamonji is an independent researcher, dancer, writer and facilitator focused on Africa, indigenous knowledge and the earth. After learning more about the effects of colonialism from Latin American history classes in college, she started exploring indigenous knowledge and spirituality nine years ago. This journey led her to connect with elders from different communities in Kenya, who gather to remember and revive their indigenous practices.

Wangũi has a master’s degree in African studies with environment from University College London, and convenes a collective called Afrika hai, which researches, reconnects to and shares indigenous African knowledge and practices for regeneration. She is based in Kenya, blogs at wangui.org and tweets as @_fromtheroots.

How are the communities you work with affected by climate change?

In this region, we’re not sure about the weather anymore. Agricultural seasons, food availability and water are affected, especially for people who are already living in dryer areas. There are other consequences for people living in wetter areas where it rains so much there are landslides.

There do need to be shifts even within indigenous communities because climate is shifting, so we need to shift to align to a new normal to be able to thrive. Regaining spiritual technologies of praying for rain, of blessing the land, blessing the people; all of these contribute to harmonious relationships.

Technological shifts in how to organize or design farm land in order to grow food. In a place that’s being affected by landslides, how can we rethink how we are building houses and settlements, and how can we restrengthen the soil —whether that means planting certain kinds of grasses or terracing. In places that are dry what are some technologies we can use for water retention, for example digging swales, planting deeper, sprouting seedlings before we plant rather than planting directly.

“What do we need to be to be able to shift and support that shift in the people around us as well as the ecologies around us? Supporting that inner transformation so we can have outer transformations.”

How do we approach these shifts?

So there’s material technological shifts in what people are doing, but I’m always concerned about how we introduce those because the model used by many NGOs and other development workers has been one of imposition, one of “I have the solution and you don’t know.” Fundamentally yes I could have the solution technically to a technical problem, but problems are never only technical problems. If your problem is “people are building settlements on hillsides and it’s raining too much, causing landslides — we’ll just build some terraces.” That’s a technical solution and technically it’ll work great, but process is so much more important than the product of a terrace.

If you go from the opposite direction and start with enabling people to gain agency over their lives and sovereignty, then they make the decision and they might have a different solution. “People are cutting down trees because they need fuel so let’s use clean cookstoves,” where actually your vision might be very limited because you’re only understanding the problem at a surface level. But when people regain agency over their own lives and their visions expand, and since they’re the ones living those lives, they can bring bigger visions to their reality. You can have the “right” technical solution but you can still be colonial in the way you share that solution.

In your article you wrote, “In the global North, it has become more common to declare that indigenous peoples hold the solutions to the climate crisis. Such rhetoric risks being only lip-service if solutions don’t recognise and resource indigenous-led work to repair damage to indigenous cultures, commit to indigenous resurgence and integrate the wisdom of indigenous values.” Can you reflect on that a bit?

“Indigenous knowledge has the solutions to everything.” It’s become hip, like the new “sustainability.” Yes it’s true, but you have to recognize that colonialism happened. There has been damage done —if not done to the body of indigenous knowledge, the holders of it. The damage is on so many different levels; on even recognizing that the knowledge you hold is valuable because in the colonial system, that knowledge is not knowledge.

What type of resourcing is needed?

The main model in philanthropy is resourcing projects with a particular timeline. You can’t give a timeline to a process. Colonialism was not an event, it was a process and is still ongoing. If that damage has been ongoing for at least 500 years and then you insist on funding something that will only be a 3-year project to deal with things that have been 500 years in the making, there’s a mismatch. There needs to be a shift towards resourcing processes, resourcing people and partnership. Partnership in solidarity that actually intends to build relationship and is transparent about its values, its assumptions, its desires because sometimes people assume they don’t have a role other than giving money.

Resourcing healing and repair work is necessary and I don’t know of many people who do that. We won’t have climate justice, you won’t have gender justice, if you’re not also doing healing work. Because all of these forms of justice— they’re not technical, it’s not just about geoengineering with climate. They’re fundamentally about how we live life and how we interact with each other and with earth. Because all of that is relationship, and there’s been damage to relationships, then we need healing work to repair those relationships. That’s where justice will sprout from, it’s a core aspect of justice.

What are you working on now?

I’ve taken a break from working publicly, I’ve been doing a lot of internal work, a lot of resting to support the public work I do. In terms of the public work that I do, I’m supporting a collective that I convene called Afrika Hai. That collective is one year old but the vision for the collective is to be a hub or an archive, a space for people to remember, to research indigenous African knowledge and share those with a greater number of people. We’re figuring out the kind of people we need to be to be able to carry that memory work in a space of East Africa that is still very colonial, does not remember or do very well with remembering and valuing indigenous knowledge.

The events of this year have deepened the faith in needing this work. There are big changes coming and how do we prepare for that. Yes climate, but even more. All of these areas are begging for something new, something different, a shift. So what do we need to be to be able to shift and support that shift in the people around us as well as the ecologies around us. Supporting that inner transformation so we can have outer transformations.

I am integrating a lot of material into courses and workshop experiences which I will begin offering from next month. Some of the topics of those include life purpose, regenerative justice, and movement improvisation. I am also preparing for a one year course offering to start next year called Rejea, Radical Reskilling for Regeneration. This is an offering close to my heart as it will offer a space for folks in East Africa to come back to themselves, and the Earth, build a critical consciousness of the world, and of their power to create regenerative realities. I am also at the moment working on a Zine on regenerative care practices alongside my fellow fellow, Tarini.

“There needs to be a shift towards resourcing processes, resourcing people and partnership. Partnership in solidarity that actually intends to build relationship and is transparent about its values, its assumptions, its desires because sometimes people assume they don’t have a role other than giving money.”

What would be your advice to other feminist climate activists on collective care?

You can read Wangũi’s work here on Open Global Rights, as well as articles from the other fellows Tarini Manchanda, Beatrice Tulagan and Vanessa Daza Castillo.

The above featured photo is from FRIDA and OGR.