The Story of Mahakam River in Indonesia: From the commons to extractivism and back 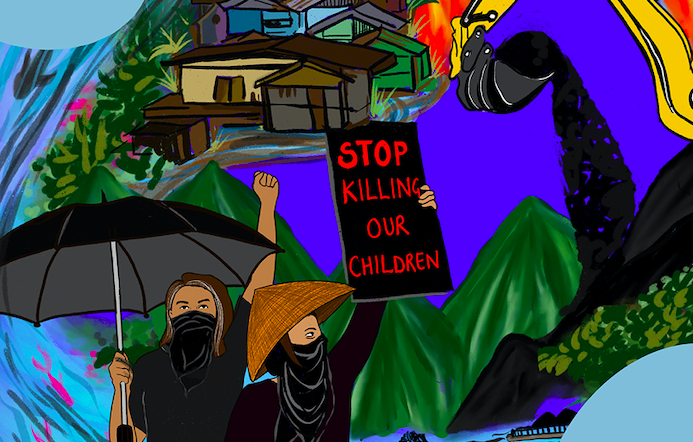 For over a hundred years, the second longest river in Indonesia and its surrounding ecosystems have been concessioned off to the extractive industry. Different parts of the Mahakam River in Kalimantan have been mapped, monetized and assigned different extractive purposes: logging, mining, industry, settlement, and many others. From 2009 to 2013, the Mahakam watershed lost 128 thousand hectares of its natural forest due to wood extraction, mining, and wide scale plantations.

Every day, rafts carrying logs from pristine forests travel along the Mahakam towards processing plants while lines of barges transport timber and coal so it can be shipped to other parts of the country, Asia and Europe. These activities can be traced back to colonial days and have grown massively and systematically since Indonesia’s independence. Alongside the gas and mining industry, logging activities became the main income source for the authoritarian Suharto regime and his cronies from 1965 to 1998.

The effects of privatization on the Mahakam River

The river flows through Samarinda City, a trading port since the 1700s, which grew hand in hand with the extractive industry. Samarinda’s local administration has allocated more than 70 percent of the municipalities’ land for mining. The deforestation and soil erosion first from the logging industry and now from the coal industry’s digging of the soil, have caused substantial erosion and sedimentation of the river, leading to a dramatic increase in flooding. From November 2008 to June 2020, floods inundated almost every corner of the city, covering the main roads and interrupting economic activities, including public transportation and markets which consist mainly of women vendors. About 50,000 people have been affected by five to six major floods every year.

Coal mining is affecting families’ livelihoods and health, as flooding increases food prices and destroys houses, placing a heavier burden on women’s economic and domestic work. Mining has also displaced agriculture-dependent families from their lands and led to the death of children drowning in abandoned coal pits, of which there are more than 200 in the area. When mothers demand justice from the government and mining companies, they are subject to intimidation.

According to an investigation carried out from 2009 to 2011 by the East Kalimantan Environmental Agency, the river is heavily polluted; the conservation organization, RASI Foundation, found a significant amount of the metal cadmium and lead. Farmers and fisherfolk also claim the water is polluted with dust particles and has increased acidity levels. The fisherfolk of Samarinda have difficulties working on the river since the timber and mining companies occupying the river bed have increased the river’s sedimentation. A local newspaper recently reported mass deaths of the river’s fish. Some of the fisherfolk who farm river fish in floating ponds are also affected by the coal transportation vessels, which often damage these ponds.

The state water company Perusahaan Daerah Air Minum (PDAM) responded to the reports of pollution by increasing the usage of water purifier chemicals such as calcium hypochlorite, sodium carbonate, aluminium, sulphate, chlorine and kaolin. If consumed continuously, these chemicals are carcinogenic. Despite customer complaints, PDAM has an enormously profitable business and also used a water crisis as an opportunity to double its profits by raising prices during droughts.

Mining has polluted water springs as well, forcing women to travel further distances to find cleaner sources of water. Given this scenario, women and their families have three options: they can consume water from the abandoned mine pits, build their own wells, or buy water gallons and water tanks. The first option would mean drinking polluted water and the other two are costly. Digging a well can cost the equivalent of up to one or two times the monthly minimum wage in Samarinda. Many families end up having to spend almost a third of the  family’s income on water gallons.

Women and Samarinda residents organize to reclaim the river

Women and the younger generations who are part of the East Kalimantan Mining Advocacy Network (JATAM) are fighting for their rights in light of the water crisis. They are asking the government to stop mining and start closing the abandoned coal pits so that Samarinda can start addressing its social-ecological crisis.

In 2011, a group of NGOs, students, academics, and local residents – including women, farmers and Indigenous people’s representatives – came together to form the Samarinda Lawsuit Movement (Gerakan Samarinda Menggugat, GSM), to submit the first citizen lawsuit in Southeast Asia in relation to coal, flooding, climate change and the death of children in abandoned mine pits. They took the relevant local, regional, and national government bodies to court for negligence and for violating existing environmental laws. JATAM supported GSM in building their case by requesting the Environmental Impact Assessments from 63 coal companies which were used as evidence.

In 2014, the citizens won the lawsuit in the District Court of Samarinda and the judges ruled that the government had been negligent in fulfilling their obligations under the 2009 Environmental Law, which states that: “Everyone shall be entitled to a proper and healthy environment as part of their human right.” After the court denied the government defendants’ request for appeal, the government appealed a case to the Supreme Court who said the Indonesian court system did not recognize the citizens’ lawsuit.

Samarinda’s residents continue to organize and fight for their water rights. In 2016, a group of environmental activists formed a community and recruited volunteers to take care of the river by regularly cleaning it and planting more than 9,000 trees to restore the river banks. The women of Samarinda also established a solidarity group to support women who are impacted by coal mining. The group visits schools to educate teachers and students about the 200 abandoned coal pits that surround the city. The women’s group as well as a youth group called “Aksi Kamisan” or “Thursday protest” organized regular protests to remind the government of the unsolved human rights cases, corruption and environmental issues.

The people of Samarinda have long lived in deteriorating environments and have been forced to adapt to the demands of the global market. Reclaiming the living space of the commons is not an easy task; they are having to imagine what kind of transition is required to live side by side with the river as a common, and learning to unite and seize political support to protect their Mahakam river.

Siti Maimunah is a PhD student and Marie Slodowska Curie Fellow at  the University of Passau (Germany) in the “Well Being, Ecology, Gender and Community” (WEGO-ITN) project.

Sarah Agustiorini is an activist and researcher of a woman organisation called Tim Kerja Perempuan dan Tambang (TKPT) and of the local NGO JATAM East Kalimantan. JATAM is part of Women in Action on Mining in Asia, which is a partner of GAGGA.

Their story originally appeared in the series titled “Reimagining, remembering, and reclaiming water: From extractivism to commoning” co-organized by Undisciplined Environments and FLOWs. This version has been edited for length. You can find the full version here.