The women of Mazvihwa restore their land and water 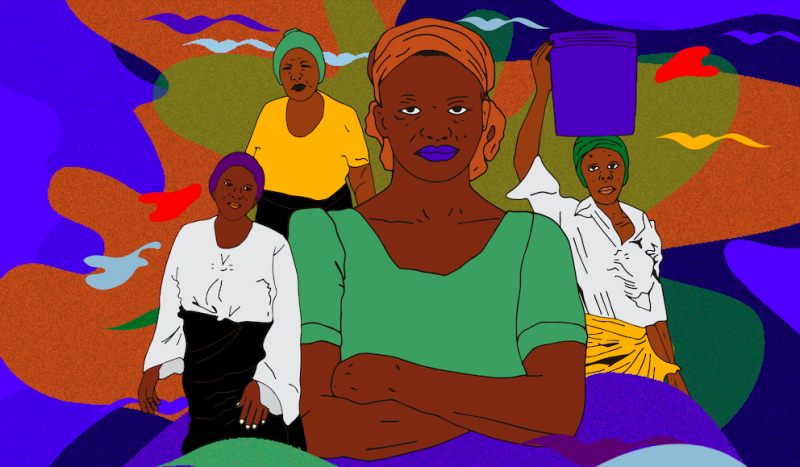 Zimbabwe was once known as the bread basket of Southern Africa, but climate change, ineffective farming practices and economic crises have turned it into an arid desert. In 2019 Southern Africa experienced the worst drought in 40 years, with temperatures rising at twice the global rate and with increasingly erratic rains. These changes have caused water scarcity in a country where most of the rural population depends on rain-fed farming to sustain themselves.

The women of Mazvihwa in southern Zimbabwe are very familiar with drought. Considered the country’s least productive region, the area surrounding Mazvihwa has poor soils and regular water scarcity which make it more suitable for cattle and game ranching than growing crops. So when the severe drought hit Zimbabwe and many in the community had no other option to earn an income, women and men started digging dried up pools in search of gold in a region that is mineral-rich and full of mines. This gold panning has contributed to river siltation and further water scarcity, in addition to the contamination caused by the lack of proper toilets, ineffective farming practices and the nearby Sabi Gold Mine.

The Sabi Gold Mine drains the local Lundi River’s water for its operations and discharges harmful chemicals like mercury and cyanide into it. The waste is toxic to people’s health and causes river eutrophication which further affects water quality and kills aquatic life. This is the water that almost 1,000 households along the Lundi River in Mazvihwa depend on for their consumption and daily tasks, and have to walk at least 10 kilometers to access. Their government hasn’t drilled any new boreholes in the area for 21 years nor regularly fixed the few ones that remain.

In the past, the colonial government had forced communities to build small earthen ridges on their land to prevent soil erosion, but these were not designed to work with the local soil and the run-off dried the communities’ lands and silted the rivers. Fifty years later, Muonde Trust and the women of the community are replacing these ridges with water storage systems and a technique called “dead level contour” which optimizes water flow and uses water to irrigate crops through gravity.

As an alternative to gold panning, the women of Masvihwa are generating income through Analog Forestry, a method of agroforestry that restores the productivity of degraded land by imitating the original native forest. Analog Forestry provides new sources of food and income, while making the soil fertile and increasing water retention and quality.

With the support of the Global Alliance for Green and Gender Action and technical advice from Centre for Nursery Development and Eru Propagation, the women of Masvihwa are restoring and growing both traditional and exotic tree and plant species. The women increased their knowledge of trees and learned how black-eyed peas (or cowpea) provides a suitable microclimate for the growth of certain tree species. As the restoration process through Analog Forestry takes time, the women can harvest the black-eyed peas every year to sell as a source of income and start a saving and lending club, while expecting bigger gains in the future.

This community in Mazvihwa is supported by Muonde Trust, a partner of the International Analog Forestry Network which is part of the Global Alliance for Green and Gender Action network. To learn more about Muonde Trust’s work, click here.

Illustration by Naadira Patel at @studiostudioworkwork.