“They are killing the river”: Q’eqchi’ women defend the sacred Cahabón 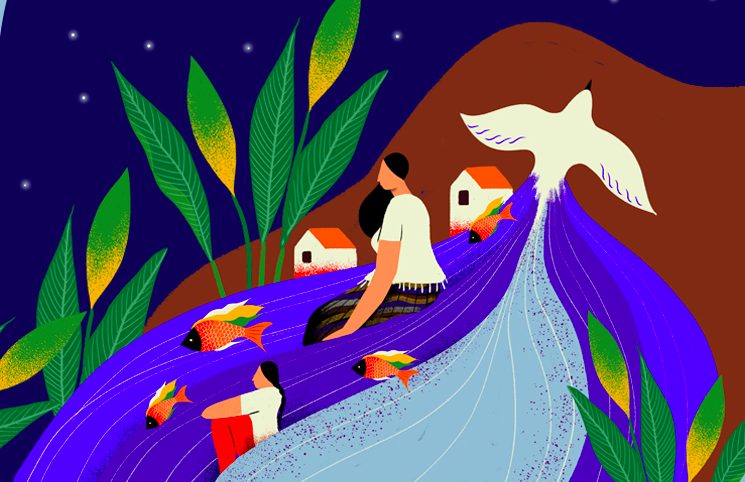 Two rivers cross in Guatemala’s municipality of Santa María Cahabón, the ancestral territory of the Q’eqchi’ peoples. To the Q’eqchi’ communities, these rivers are considered sacred and represent the “blood of the earth.” The water from the Cahabón River, one of the main rivers in Guatemala that runs through the department of Alta Verapaz, the small river Oxec and dozens of streams are the main source of water for 195 Q’eqchi’ communities.

In 2015, the Q’eqchi’ communities observed machinery and construction on the Oxec River and on the Cahabón River bed. They soon discovered that the Ministry of Energy and Mines had granted a construction license to the Oxec S.A. Company to build a hydroelectric project on Q’eqchi’ ancestral land without the communities’ consultation or consent, and in violation of the ILO Convention 169, which protects the human rights of Indigenous peoples.

In response, Q’eqchi’ women and their communities called for the company’s licenses to be revoked. Bernardo Caal Xol, the representative delegated by 56 communities in the Community Assembly of the Q’eqchi’ people of Cahabón, filed the following legal actions:

In early 2017, Guatemala’s Supreme and Constitutional Courts ruled in favor of the communities, recognizing that there had been no consultation process but still authorized the company to continue its operations.

A few months later, the Q’eqchi’ people of Santa María Cahabón carried out a community consultation in which, out of 26,554 people from 139 communities, 26,537 expressed a resounding NO to the installation of hydroelectric projects.

After the Q’eqchi’ people took these actions, their leaders increasingly suffered threats, persecution and criminalization. As a result of this, community leader Bernardo Caal was wrongly sentenced to seven years and four months in prison for the alleged crimes of illegal detention and aggravated robbery. He has been in prison since January 2018.

Since then Q’eqchi’ women have been at the forefront of the Río Cahabón Resistance and continue the fight for the defense of their river and territory, especially the daughters of Bernardo Caal. They have participated in peaceful demonstrations, demanded Bernardo Caal’s release, influenced decision-making in their elected positions in local government, and called for an end to the criminalization and persecution of the peoples who are willing to defend their territories.

The Oxec S.A. Company had promised to bring infrastructure, economic support and jobs. Instead the community says, “they are killing the river.” Today it is under threat from seven hydroelectric projects that have already destroyed hectares of primary forests and hills that are sacred to the Q’eqchi’.

The presence of the Oxec I and Oxec II hydroelectric projects has led to drought, contaminated the water, left many communities without water access, killed aquatic species, and diverted the riverbed. The communities do not even receive electricity — Alta Verapaz is the department in Guatemala with the most hydroelectric plants, however it is also where the greatest number of inhabitants (more than 60%) do not have electricity.

Furthermore, the rains of hurricanes Iota and Eta exceeded the capacity limits of the hydroelectric reservoirs, putting populations and biodiversity at risk due to controlled discharges. In the future, climate change will only increase these types of occurrences but despite these challenges Q’eqchi’ women and their communities will continue to resist and fight for their sacred river.

The Resistencia de Santa María Cahabón is supported by Madre Selva who is a GAGGA partner.