We, Women are Water 2020: Fighting the impacts of sugarcane monoculture in Honduras 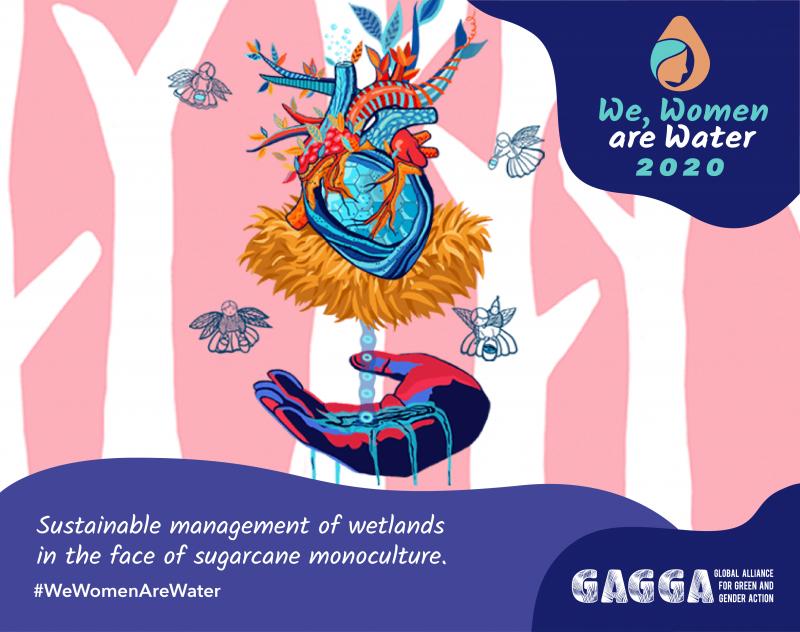 The southern wetlands of Honduras along coastal areas in the Gulf of Fonseca is the 1000th “Ramsar” site, meaning it has been recognized as a Wetland of International Importance. Within these wetlands lies the protected wildlife area Las Iguanas – Punto Condega, which consists of 4,169 hectares of wetlands and includes six coastal communities. UEDESAMAR operates in the “buffer zone” adjacent to these protected areas, where land use should be partially restricted.

UEDESAMAR is made up of nine community organizations. Although some of these organizations have male members as well, women also take the lead in the management of the mangrove forest. As part of this effort, they have launched small-scale fishing projects, ecotourism and initiatives to protect the Golfina turtle, restore degraded mangrove areas, and to promote analogue forestry and agroecology. They also promote environmental governance by carrying out advocacy at local and national levels to push for policies that regulate the use of marine-coastal resources. UEDESAMAR’s experience shows that conserving ecosystems and biodiversity generates well-being, not only at the ecosystem level but also for the communities living there, giving them a source of income.

Despite having a proposal for sustainable management of wetland resources, families face impacts on their health and living conditions caused by the excessive agriculture of sugarcane near the area. This monoculture has caused water scarcity as well as losses in the harvest – since aerial spraying with pesticides has accelerated fruit ripening processes in trees nearby. The worst consequence of the pesticide contamination and lack of quality water has been its effect on people’s health. There are high rates of kidney, respiratory, gastrointestinal illnesses and various types of cancer; more frequently suffered by women.

Since the most pressing threats to the human rights of communities are associated with access to uncontaminated and abundant water sources, the women of UEDESAMAR have taken action. Given the negative impact of sugarcane monoculture in their communities for the environmental and human health, they seek to influence local and national authorities to take measures aimed at promoting a healthy environment free from contamination.