We Women are Water 2020: Mountain Woman in Cordillera Real 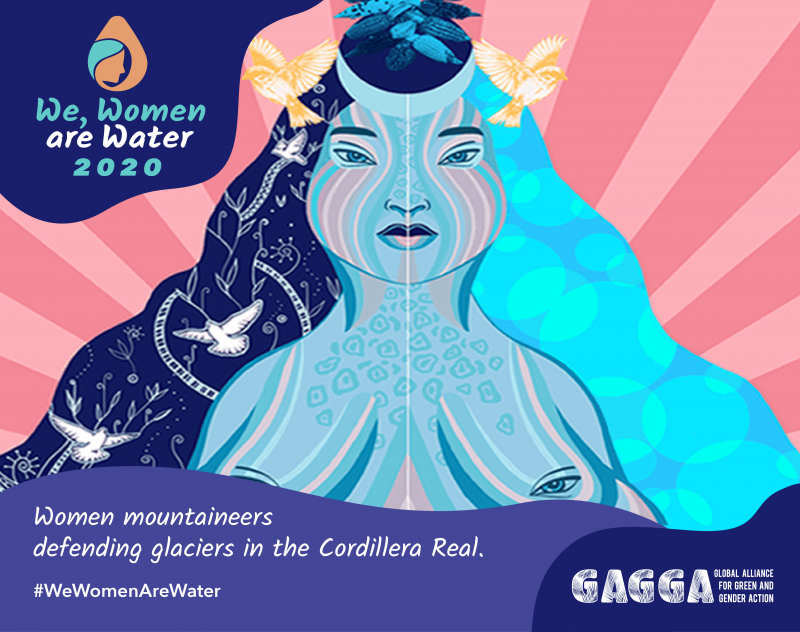 The water supply for populations living near the glaciers of the Cordillera Real mountain range outside La Paz, Bolivia have been contaminated as a consequence of pollution and the effects of climate change. The Chacaltaya glacier, for example, melted and disappeared 10 years ago. The communities around the Huayna Potosí and Chachacomani glaciers are losing the ability to conserve ice and purify the water that travels down to the cities. Some of the factors that are affecting the mountain range are: pollution generated by surrounding cities, damaging extractive practices, the negative impacts of tourism and lack of infrastructure to deal with waste in an ecological way.

Even though mountaineering is still considered a male activity, the organization Mujer Montaña (Mountain Woman) breaks the mould. It trains women to work as instructors, teaching mountaineers to engage in mountain sport in a conscious way, without leaving a human trace on the glaciers which are already affected by climate change. This helps prevent the contamination of water that travels down to the cities.

These women are breaking through the sexist stereotypes not only by climbing mountains, but by acting as guardians promoting the conservation of glaciers, shedding light on the contamination of water, and proposing solutions using mountaineering as means for transformation. Alongside this, they organize cultural activities, debates, environmental education and mountain climbing experiences to raise public awareness and reduce contamination of the Huayna Potosí and Chachacomani glaciers. All these actions have impacted the lives of mountain women, improving their self-esteem, autonomy, public involvement and living conditions.

Mujer Montaña carries out advocacy to push both the ancestral and municipal authorities to commit to solutions to the problems facing glaciers and to allocate the necessary resources and means. The solutions they propose include: implementing regulations for visitors and the local population, constructing ecological infrastructure and promoting environmentally responsible mountaineering behavior.

Mujer Montaña is raising demands with the Bolivian state for a more effective regulation of mining activity, since this has had a negative impact on the Cordillera Real. Finally, they aim to make visitors to the space aware of its importance, and commit to ensuring that their actions respect the human right of nearby populations to access clean water.