“We’re not going to eat eucalyptus”: Qom women organize to preserve their territory 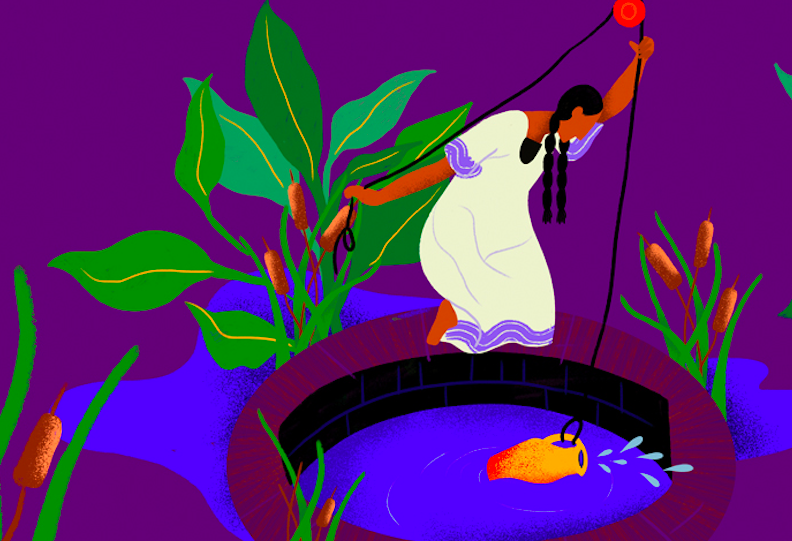 The Paraguayan Chaco is a flat and arid territory, with average temperatures ranging between 35 and 40 degrees. The climate crisis has caused alternating cycles of droughts and floods in the region, which affect the availability of safe water for consumption and food production.

Faced with water scarcity and waterborne diseases from poor quality water, the Toba Qom indigenous community of Santa Rosa organized the construction of a 75-meter-deep artesian well seven years ago in order to regularly access safe water. The community also preserves and reforests the totora, a native plant which grows in ponds that collect rainwater (called tajamares) and that Qom artisans use for their handicraft work.

Today their water reserves are at risk of drying up again. The NGO Fundacion Paraguaya is planting eucalyptus monoculture on their territory as part of their “Poverty Stoplight” program to eliminate poverty through microfinance and entrepreneurship. This is part of a wider trend in Paraguay where the government often promotes reforestation with harmful non-native species like eucalyptus in the name of economic and rural development, and wrongly labels them environmental “achievements.” In reality, eucalyptus monoculture replaces natural ecosystems and their rich biodiversity in order to produce a single raw material, such as pulp.

The Toba Qom people own 2,117 hectares of land, of which the NGO plans to use 20 hectares for eucalyptus monoculture without the communities’ prior, free and informed consultation or consent. Areas near the community have already experienced drought and the depletion of water reserves due to this industrial crop, which consumes an average of 85 liters of water per day according to the World Agroforestry Centre. The Organización de Mujeres Artesanas de Santa Rosa (Organization of Artisan Women of Santa Rosa), dedicated to defending life, collective rights and socio-environmental rights, said five of the eight Toba Qom communities of the area are against the project.

“We oppose the eucalyptus plantation because in the Chaco we don’t have much water,” said Bernarda Pesoa, the Qom leader and head of the Organización de Mujeres Artesanas de Santa Rosa. “We have our artesian wells, our fruit plants, and the eucalyptus trees are going to damage the environment a lot. We are not going to eat eucalyptus, they are just another business. We are opposed to it because we are environmental defenders and this will only benefit 40 families, not the entire community.”

These plantations cannot be considered forests because they do not fulfil the functions of genuine native forests in the cycle of returning nutrients to the soil. Old-growth forests store carbon for centuries, whereas plantations of monoculture trees are actually net emitters of carbon due to the disturbance of the soil and the degradation of the previous ecosystem.

The reforestation project has already cut down some of the Qom community’s scarce ancestral trees and plants which they eat and depend on for their livelihoods, impacting the indigenous women’s well-being, sovereignty in their territory and their autonomy. Many women from the community make jewelry out of the seeds from these native plants and sell them. They also worry that if the eucalyptus dries out the land, they can no longer grow cattail plants on their territory which they use as raw material for crafts while it also offers an environmental service.

In August 2020, the Fundación Paraguaya prepared to clear grasslands on Qom territory through burning and logging. Qom community organizations filed complaints with the local Environmental Prosecutor’s Office and with the Ministry of the Environment and Sustainable Development, and requested support in this process. However, the NGO’s clearing of forest accelerated and the Qom communities under the lead of Bernarda had to take measures in their own hands.

Two days of demonstrations and intermittent roadblocks on a local road led to the temporary suspension of the eucalyptus plantation and the creation of a Dialogue Table at the headquarters of the local governor’s office between public institutions, representatives of the Qom communities and Fundación Paraguaya. This Dialogue Table has yet to meet, but the Organization of Artisan Women of Santa Rosa gathered with environmental NGOs to discuss joint actions that would expose the enormous impact eucalyptus plantations have in Paraguay.

In October 2020, Bernarda was physically attacked on her community’s lands by a group of people after she expressed her opposition to monoculture. The attackers, members of a neighboring community who support the Fundacion Paraguaya project, according to Bernarda, threatened to burn down her house and inflict further damage on her.

The Santa Rosa community demands the withdrawal of the project and the definitive cessation of eucalyptus plantation, and addresses the following actors.

The community demands the following authorities guarantee the definitive cessation of the plantation and urgently investigate the attack against the defenders and provide protection.

2- Ministry of the Environment of Paraguay (MADES)

The Organización de Mujeres Artesanas de Santa Rosa is a partner of Fondo de Mujeres del Sur, who is part of the Global Alliance for Green and Gender Action network. Follow the Organization of Peasant and Indigenous Women Conamuri, who work with rural women in 12 departments of Paraguay including with the Qom of Santa Rosa.