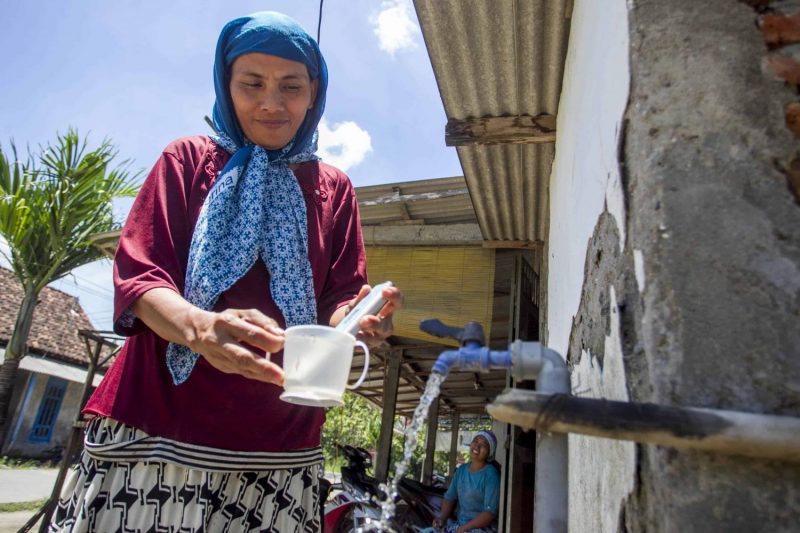 Litter and industrial wastewater are inundating Indonesia’s rivers, contaminating the primary source of both water and subsistence for millions of people in the country. Industrial factories line the river banks, where they have easy access to river water for use in production processes, as well as for disposal of industrial wastewater. Although dumping of wastewater is illegal, the government is doing little to address the problem. Pollution monitoring and control are non-existent, and environmental laws are not properly enforced, which encourages further violations.

Since 2016, GAGGA has supported Ecological Observation and Wetlands Conservation (ECOTON) to strengthen the participation and leadership of women in water pollution control in Indonesia, and to support them in defending their rights to clean water and a healthy environment, including through litigation.

ECOTON was established in 1996 as a study group on wetland conservation at the University of Airlangga in response to the growing concern about environmental problems in the province of East Java, particularly from the Surabaya river. The group has a long history of documenting water pollution, conducting research and providing tools for people to protect and fight for their water resources in Indonesia.

“Our objective is to achieve sustainable use of natural resources, to preserve biodiversity and maintain environment services for the well-being of all people through participatory wetland management practice and that involves the community” says Riska Darmawanti, ECOTON’s Research Manager. “Data from the National Statistical Bureau indicate that in 2014 there were 10.8% or about 8,786 villages in Indonesia that have dealt with water pollution problems… If you convert this into the number of people [who would now] be impacted by water pollution, it would roughly reach 28.8 million people.” ECOTON mainly works in the Brantas watershed in the province of East Java.

The Impact of Water Pollution on Women in Lakardowo

Lakardowo in Mojokerto, East Java is a village with plenty of ground water springs and fertile agriculture land.  Most people living in this area are farmers growing their own grains for subsistence, such as rice, corn, cassava, mung bean, peanut, chili, eggplant, as well as fruits such as banana and mango. The farmers also raise cows, goats and chickens in their houses, and are living healthy and peaceful lives.

In 2010, a hazardous waste processing company PT Putra Restu Ibu Abadi (PRIA) built a waste management facility to produce paving blocks and wall bricks. However, people were not consulted prior to its construction and were not informed that the factory would be using hazardous waste materials in the production process. The problems for the surrounding communities started when the factory began illegally dumping hazardous waste, which spread chemical contaminants, contaminating the groundwater sources in Lakardowo.

The loss of clean water sources in Indonesia has a wide range of adverse impacts, including particular impacts on women. ECOTON has worked extensively in Lakardowo, where many people have been forced to purchase water for drinking and cooking. Only some can afford to buy gallons of water for bathing. The continued use of contaminated water for bathing has caused severe itching and skin problems for many people in the community, for women especially. For some, the problem is so bad they are forced to seek treatment. Other longer-term impacts of water pollutants may become more evident over time, after years of exposure. Mercury, for example, is a highly toxic heavy metal that can eventually cause kidney problems, headaches, bleeding gums, tumors and vision problems.

Women are especially vulnerable to these problems, as they are more involved with the domestic work in the household, including managing water. Women have more direct and prolonged contact with water, and thus more exposure time to pollutants. Women are also more susceptible to pollutants than men because they have more fat/lipid tissue, which stores toxins. Pollutants can also impede fetal growth and development during pregnancy. Adverse health impacts on babies and children can mean greater demands on time, energy and financial resources from women who in many cases, are caring for them.

With support from GAGGA, ECOTON has strengthened the technical expertise and confidence of a group of women in Lakardowo to assert their right to water. ECOTON began by sharing information and raising awareness about the direct health impacts of contaminated water. The next step was to strengthen women’s skills so they could actively participate in monitoring water pollution. Although women in the village were aware of illegal dumping, they did not know that the waste included dangerous liquids. They also had no evidence to demonstrate that the illegal dumping was taking place and harming the village’s water sources. The women who are part of the organization Gerakan Perempuan Lakardowo Mandiri or Independent Movement of Lakardowo Women (GREEN WOMAN) now have the skills to identify pollution problems and design actions for campaigning, lobbying and advocacy. ECOTON’s guide for community-based water quality monitoring explains how to easily measure basic parameters such as temperature, pH (which measures how acidic or alkaline the water is), total dissolved solids and electrical conductivity. Measurements can be made with simple digital equipment purchased in a store or online – the same used to measure the quality of water in a fish tank.

The members of GREEN WOMAN began monitoring the basic parameters around three sub-villages, taking into account reports by villagers who suffered from skin disease. With these measurements, they could assess the quality of the water in their wells, and determine whether it was drinkable or not. After monitoring for more advanced parameters like bacteria, heavy metals and sulfates, they realized that the value of the sampling site parameters where much higher than the standard, meaning the water cannot be considered safe.

Having the skills to monitor water quality, collect social and health data and know how to interpret the data collected helped prepare these women to advocate on their own behalf for access to safe water. The women’s leadership was key, as people in the community now know about the quality of the water in their wells and can take action to avoid drinking or using contaminated water. When necessary, community members have begun to collectively purchase clean water.

The women have also learned about regulations on the quality standard of drinking water, and can now discern whether officials give them incorrect explanations about the condition of their water resources. Training and practice have given these women the courage to discuss the data presented by government institutions.

The women’s data has also become crucial evidence in the fight against industries that are polluting Lakardowo’s water. In 2017, GREEN WOMAN filed a lawsuit against the mayor and local government of Mojokerto for extending the permit of the hazardous waste processing company PT PRIA. The mayor, who was on the plant payroll, had extended the permit on the basis of incorrect data, without adequate consultation with the community and before the completion of the mandatory Environmental Impact Assessment. Riska explains the challenging social context: “In the village, half of the people work in the plant and the other half are farmers. The water pollution case has divided them and destroyed the social relation between the two groups.”

The women are insisting that the local government withdraws the permit and cleans up the contaminated area. Although the first decision in the case was unfavorable, these women are now appealing to the Supreme Court. ECOTON has supported them throughout the legal process. Despite the first legal setback, positive changes are already evident. A new village head has been more willing to cooperate to address water pollution. The women also indicate that they are treated more respectfully by local authorities and the police since they now know and speak out for their rights.