Confronting the climate emergency: A crisis we did not cause 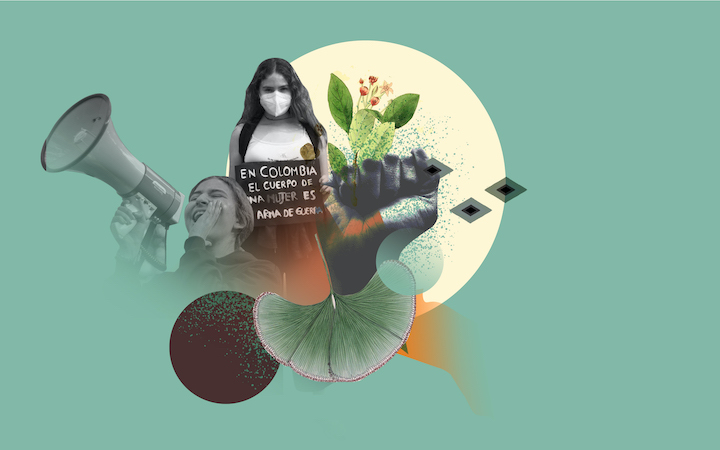 My name is Sofía Gutiérrez, and I grew up in the context of an armed conflict. In Colombia, life continued as the violence increased. My bedtime stories were the stories of my grandmother telling me how she and her family had to run away from the violence in the countryside. As they heard that the people who stayed were killed, they grew with fear but still craved change and the fight for justice.

But they weren’t only stories; these are the realities being lived by people from the most vulnerable areas of Colombia where people don’t have the time to fear because they need to fight back. They need to stop the destruction of their communities from extractivism and war at the same time.

Colombia is the most dangerous country in the world if you care for the environment; last year 65 environmental defenders were killed. Every day, world leaders, banks and corporations ignore what the most affected people and areas (MAPA) are going through as long as it doesn’t directly affect them.

This leads us to a fundamental thought: the most affected people and areas are always left behind. Mainly because the economic model does not see us as worthy of basic human rights. The Global South has been confronted with the climate crisis for a long time; it is nothing new for us.

The basis for the climate crisis was laid during the time of colonization. With colonialism there was massive exploitation of the earth and genocide, the murder of Indigenous wisdom. It was widely believed that our country and our people had been given to the colonial rulers as a gift so that they could meet their greed without restriction. They completely ignored the idea of ​​sanctity and the preservation of natural resources.

As a result of this, we can still see in our daily lives the dynamics of accelerated consumption and extractivism that are still ongoing to boost the Global North’s economy. With this in mind, it is important to acknowledge the fact that the formerly colonized countries are emitting fewer greenhouse gases. We are only the resource suppliers for the exploiters, but we are still faced with the worst consequences of the climate crisis — a crisis that we did not cause.

This is what I am pushing for in my activism work. It wasn’t until August of 2019, when part of my country’s rainforest was being burned down, that I found shelter in climate activism. As I got more involved in the climate movement, I realized the magnitude of the relationship between climate change and social justice as I was able to listen firsthand to the people that suffered the climate change impacts in my country. From my family’s experience, we were always waiting to see if the rains from the wet season would drown my home.

I started to understand that my country could not move forward in environmental matters if we did not have access to education and information on how to protect our territories properly and to help those on the frontlines to do so with legal tools. I had the chance to be part of national dialogues with my government regarding fracking, the declaration of a climate emergency and educational matters. As I got involved in politics, I worked with my local government and decided that I would fight for the access to quality environmental education. After hard work alongside NGOs, citizens, and human rights and environmental defenders, Bogotá declared a climate emergency at the local council and the city hall started to make greener policies.

Nowadays, I am part of a youth organization called Pacto X el Clima. We started as a youth movement and our main goal was to give power to the youth in decision-making spaces. Fortunately, what started with 12 young passionate activists has become a youth NGO fighting the climate crisis with different projects, such as the environmental educational program I created.

I believe change starts with knowledge and part of climate action is to provide access to information and quality environmental education to youth as a right and not as a privilege. When people have access to information and the proper environmental conditions to learn, that means one more defender of social and climate justice in the world. It is our duty as activists, and people with access to education, to help achieve equality for others so they can have the same opportunities as we do. For the youth living in the most dangerous parts of Colombia and the world, climate action should not mean putting their lives at risk for defending human rights.

Since 2019 I have been teaching workshops about how to act and help others act on the climate crisis to different audiences (especially youth), including governmental entities and NGOs. With my activism I look forward to making a change in the society I live in and with that, make a better world out of it. This is why I joined Fridays For Future — so my country’s story doesn’t continue to be forgotten when major global decisions and policies are made, and so those who are at the front will no longer be silenced.

Sofía Gutiérrez is a Colombian climate activist with Pacto X el Clima and Fridays For Future MAPA. You can watch Sofía’s recent speech ahead of COP26 during a climate strike in Sweden here.

Above design is by Naandeyeah and photos are courtesy of Sofía Gutiérrez.