Qom women organise to preserve their territory in the Paraguayan Chaco 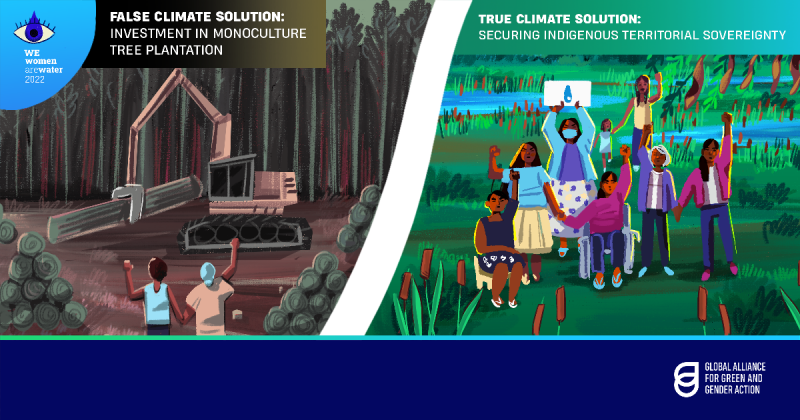 Long story short: The Green Climate Fund (GCF) is investing in new tree plantations across seven target countries in Latin America and Sub-Saharan Africa, including in Paraguay. In Paraguay, different actors — from agribusiness to NGOs — have already been imposing eucalyptus monoculture plantations on Indigenous lands and causing water scarcity, a loss of biodiversity, and soil degradation. The GCF must learn from these experiences and shift its resources towards the true, gender-just climate solution of preserving the territorial sovereignty of Indigenous women and their communities.

The Paraguayan Chaco is a flat and arid territory, with long and hot summers. It oscillates between cycles of drought and floods, caused by the climate crisis, which affect access to water. The Indigenous and rural communities of the region have long been trying to protect their lands against the rapid encroachment of extractivist projects which have caused high rates of deforestation and environmental destruction. So high that, together with the Cerrado in Brazil, the Paraguayan Chaco is today the region in Latin America with the largest area of land repurposed for cattle ranching.

In the case of the Toba Qom Indigenous community of Santa Rosa, the conflict involves a model of “sustainable development” that is being imposed on them by the NGO Fundación Paraguaya. The NGO is planting industrial eucalyptus monoculture on Qom territory as part of the organisation’s program to eliminate poverty. Fundación Paraguaya is moving ahead with this project without all of the Qom community’s prior consultation or free and informed consent, as required by current regulations.

Plantations require large tracts of land to be profitable, displacing communities from their traditional land and livelihoods. The destruction of trees and plants that serve as a source of food and work affects the well-being, culture, sovereignty and autonomy of the community, especially of women who are the main producers of food and handicrafts.

“We oppose the eucalyptus plantation because in the Chaco we don’t have much water,” said Bernarda Pesoa, the Qom leader and member of the Organización de Mujeres Artesanas de Santa Rosa (Organization of Artisan Women of Santa Rosa), a group dedicated to defending life, collective rights and socio-environmental rights. “We have our wells, our fruit plants, and the eucalyptus trees are going to damage the environment a lot. We are not going to eat eucalyptus, they are just another business. We are opposed to it because we are environmental defenders and this will only benefit 40 families, not the entire community.”

In Paraguay the government often promotes reforestation with non-native and harmful species, such as eucalyptus, in the name of economic and rural development and presents it as an environmental “achievement.” The Green Climate Fund (GCF), the UN Climate Change Convention’s financing mechanism, has also provided approximately $102 million to four projects in Paraguay to date, including one with Germany-based private equity investment firm Arbaro Fund. The GCF is supporting its plans to invest in 75,000 hectares of new tree plantations across seven target countries in Latin America and Sub-Saharan Africa which would allegedly capture 20 million tons of carbon.

In reality plantations hold little more carbon, on average, than the land cleared to plant them. Eucalyptus trees are harvested regularly, in most cases every 10 to 20 years. This repetitive cycle of clearing, planting and harvesting, and the release of carbon that goes with it, undermines the perceived benefits of these reforestation initiatives. By contrast, natural forests capture carbon 40 times more than industrial tree plantations and continue to do so for as long as they remain untouched. This shows just how ineffective investments in monoculture plantations are compared to natural ecosystems, in addition to being a solution which violates Indigenous people’s sovereignty.

Monoculture plantations  involve the indiscriminate use of fertilisers and agrochemicals that pollute water and soils. An average eucalyptus tree consumes 85 litres of water per day, according to the World Agroforestry Center, an international institute specialised in agroforestry. In an area of ​​permanent water scarcity, monoculture of this tree would aggravate an already critical situation. In communities nearby to Santa Rosa, these plantations are already causing drought and the depletion of water reserves, as well as soil degradation and a loss of biodiversity.

The Organización de Mujeres Artesanas de Santa Rosa of the Qom community have filed complaints with environmental authorities and staged demonstrations to raise awareness of their situation. As a result, they have also experienced physical violence and threats.

For the Qom women, preserving territorial sovereignty means the right to ownership of land and to access resources like water; the right to preserve identity,  culture and knowledge; the right to participate in decision-making processes; and the right to self-governance. The Qom identity is very much tied to their relationship with their territories, and without sovereignty, the Qom cannot continue their vital practices, which further contribute to climate change mitigation.

Investing in monoculture tree plantations takes away funds that could be used to preserve ecosystems and restore the natural water cycle through strengthening Indigenous women and community rights. At least 22% of the total carbon stored in tropical and subtropical forests lies in collectively managed lands, a third of which is found in areas where Indigenous Peoples and local communities lack legal recognition.

Numerous studies show that leaving forests alone to naturally regenerate offers carbon capture benefits 97% higher than establishing commercial plantations. ‘Avoided deforestation’ is considered one of the lowest-cost approaches to mitigation, but today solutions based on recognizing community land rights while expanding Indigenous management of degraded forests and water do not appear to be a priority.

Gender-just climate solutions contribute to women and girls’ autonomy, food sovereignty, natural resource access and health while recognizing and  incorporating local and ancestral knowledge. The gender-just climate solution of securing Indigenous territorial sovereignty is one of the most cost effective, sustainable and equitable strategies to protect and restore water and vital ecosystem functions, conserve biodiversity, and reduce rates of forest loss and degradation caused by agribusiness. As a result, both the natural ecosystem and the community become more resilient and have a higher capacity to adapt and respond to climatic shocks.

The Organización de Mujeres Artesanas de Santa Rosa (Organisation of Artisan Women of Santa Rosa) is dedicated to defending collective cultural and socio-environmental rights. They are supported by Fondo Mujeres del Sur, which is part of the Global Alliance for Green and Gender Action network. Follow the Organization of Peasant and Indigenous Women Conamuri who work with rural women from 12 departments in Paraguay, including the Qom community of Santa Rosa. You can also learn more here: