Seizing the Opportunity for Change 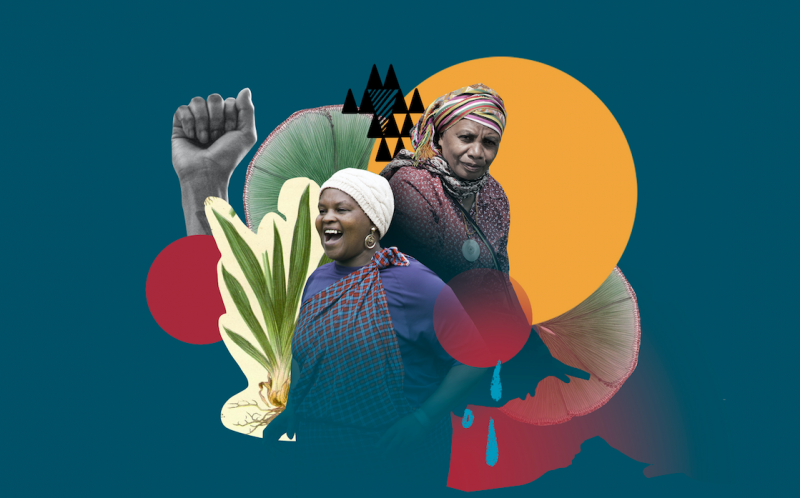 Six years ago, Aleta Baun and I found ourselves literally running around the dark and rainy streets of Paris in December trying to navigate the complex, exclusive, and oftentimes mysterious world of the UNFCCC Conference of Parties (COP).

Mama Aleta (as she is known in her community) is a Global Greengrants Fund grantee partner and Indigenous community leader in Indonesia who led hundreds of local women to peacefully occupy marble mining sites in silent weaving protests. Together, they drove out the mining company and stopped the deforestation of sacred forestland on Mutis Mountain on the island of Timor in Indonesia, an effort that saved thousands of acres of forest all told.

Mama Aleta was invited to speak at several COP21 events and share her experience as a community activist leading critical women’s environmental action to protect both people and planet. Initially, several high-level organizations with influence and political power had invited her to join their events. But as COP21 grew closer, she was slowly removed from agendas and event panels with vague apologies, and comments about her lack of expertise or empirical evidence of her work’s impact.  She ended up speaking at two side events across the city from the main events, with hardly anyone in attendance.

Unfortunately, Mama Aleta’s experience is not uncommon. The patriarchal systems we still all live within, and resulting gender inequality, ensure that women environmental activists — especially those who are Indigenous, from the Global South, and working at the grassroots — continue to experience exclusion from global policy spaces, decision-making spaces, and formal leadership opportunities. These systems not only ensure that women are underrepresented, but that they also continue to be underfunded.

The good news is that we, as funders, have the opportunity to transform this funding landscape, to challenge the oppressive systems that are sustained by maintaining the status quo, to help shift exclusion to inclusion, marginalization to decision-making, and instrumentalism to gender justice.

To help make these opportunities become reality, the Global Alliance for Green and Gender Action (GAGGA) and Global Greengrants, leading organizations in funding gender-just climate action, are doubling down on our commitment to transform the funding landscape for grassroots women and girls in the Global South leading critical climate initiatives.

Over the past year, the UN Women Generation Equality Forum (GEF) launched a 5-year journey to achieve irreversible progress towards gender equality for women and girls, in all their diversity. The GEF put together multi-stakeholder action coalitions (comprised of governments, funders, corporations, and civil society organizations) to establish visions for success, priority actions, and strategies and tactics to help achieve this goal. There are six thematic action coalitions, including the Feminist Action for Climate Justice action coalition (FACJ), for which Global Greengrants is the funder lead. The FACJ five-year goal is to channel increased political, financial and advocacy support towards goals to strengthen women’s and girls’ agency, visibility, and leadership in the green economy; enhance their resilience to climate impacts; and defend the rights of rural, grassroots and Indigenous women and girls in their full diversity as critical actors in the fight against climate change.

Building on the FACJ’s global momentum to center women and girls’ rights in climate action and financing,  Global Greengrants and GAGGA are making a collective and transformative commitment to mobilize $100 million for feminist action for climate justice over the next five years, defined as the following:

But we can’t do it alone!

At COP26 we are calling on governments, multilaterals, and philanthropy to bring gender-just climate action to the forefront of climate finance and to direct funding to initiatives led by grassroots women environmental activists who are designing, implementing, and leading transformational action like Mama Aleta.

Beyond COP26, we invite you to join us in our collaborative commitment to mobilizing $100 million for feminist action for climate justice over the next five years. Together, we can help ensure that women and girls play their rightful role in building a collective future that is more inclusive, sustainable and gender-just.

Ursula is the Director of Gender and Equity at Global Greengrants Fund and a passionate advocate for women’s and girls’ rights in environmental and climate funding and finance. She is an adjunct professor in international development, a contributing author of the award-winning publication “Climate Justice and Women’s Rights,” and a frequent speaker at conferences about equity in environmental and climate financing. The Global Greengrants Fund is a partner of the Global Alliance for Green and Gender Action (GAGGA).

Above design is by Naandeyeah and photos are courtesy of Global Greengrants Fund and the Goldman Environmental Prize.  Mama Aleta is pictured on the top right.