The struggle to keep our good living 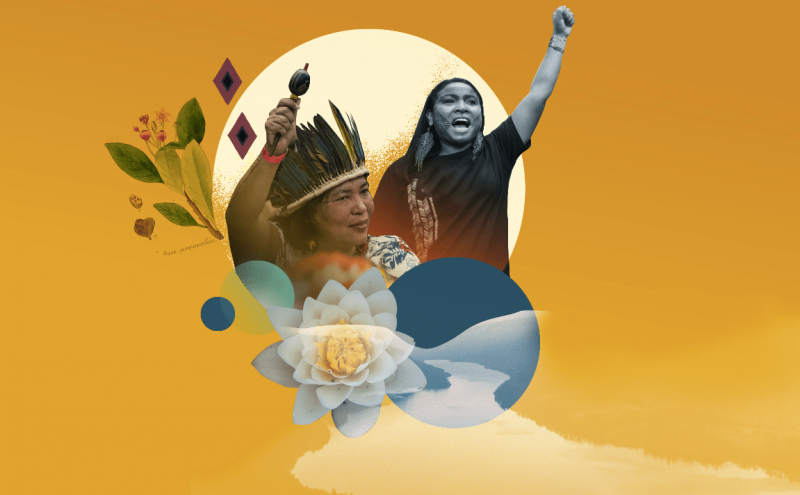 “Nowadays, we can no longer know when the waters rise and fall.”

Ixé Márcia Mura, sé mira sá Mura, sé rendawa sé rera Maloquinha em Nazaré no paranã Madeira. I am Márcia Mura. My people are the Mura, my village is Maloquinha in the district of Nazaré on the Madeira River, in the state of Rondônia in Brazil.

The last time I went to Nazaré I was ten years old. It was floods season and I was jumping in the water with my cousins. I remember from this trip that I went fishing with my aunt and that she would take water from the river to drink; she would strain the muddy water into a pot with a clean cloth. I look back at these memories from when I was five to ten years old and it was still possible to drink water from the Madeira River. However, nowadays, especially after the hydroelectric dams caused a great flood and contaminated the groundwater, it is no longer possible.

In the old days, according to the elders, the small lizard-like animals spawned only at a certain time of the year, when the water would not reach them. Now that I start to pay attention, I realize that the waters now reach the little white lizard eggs stuck to the pillars of houses and trees. The bird that used to sing a warning when the water was going to rise and fall continues to sing, but the water rises before and descends after their usual times. Likewise, the environment’s flora and fauna no longer indicate the times of floods and droughts, of planting and harvesting. Today the hydroelectric dams determine all this.

These interferences to the river have caused several problems for the territories of local communities and Indigenous territories — even the rains are different. Along with Nazaré, other riverine communities and villages on the banks of the Madeira River are without drinking water. Accessing water is difficult during drought and even if there is a lot of water in the rainy season, it is not suitable for drinking. River navigation also becomes more difficult because in the dry season the river is too dry, making way for beaches that did not exist to appear.

At the end of September, I went to the city of Uruapeara in the state of Amazonas through an ancient  route used by the Mura’s ancestors. I went to fetch my mother, who is restoring a Brazil nut grove that dates back to my great-great-grandmother’s time. It was very hot at the upper reaches and even on the shores of the nearby lake, and then there was a heavy rain. Observing this I asked my mother: “Mother, wasn’t the month of August the time of the jaguars’ heat and the storms?” She replied: “It used to be! Now the rains have moved to the month of September.”

That’s how we feel climate change and experience floods, unseasonable storms, and heat, even being in the upper reaches of lakes and forests. We all know that it is largely due to the impact of criminal fires, deforestation and the interference in rivers caused by hydroelectric dams. In general, Indigenous peoples’ ancestral territory is being constantly reduced and invaded by farmers, loggers, miners, and fires; our Mura territory is made invisible on official state maps.

We have to try to reverse these negative environmental and climate impacts, as the Indigenous and environmental rights activist Ailton Krenak says, and find ways to postpone the end of the world. From this perspective, the Mura collective works to strengthen traditional communities on the banks of the Madeira River in confronting the development projects that governments impose without considering our lives. The government declares that these projects will bring us such progress, but in fact, they only bring us death to rivers, to fish and to the entire environment. Our main action is focused on our Mura statement:

We declare that the municipality of Porto Velho is, above all, Mura territory. We work to strengthen our roots by pulling the threads of ancestral memory, and we struggle for the recognition and reconstruction of the Indigenous memory and history of the Madeira River. Even with the challenges, we continue to defend the entire environment we are part of, as well as to struggle to keep our good living.

We are currently recovering the Madeira River and it is women who are at the front of this resistance. As long as there is a Mura on this Madeira River to scream and fight, there will be Mura resistance. If not, our Amazon — which is the lung of the world — won’t last long.

Márcia Mura writes on behalf of the Mura Indigenous collective, formed by people who are recovering the Madeira River. They aim to strengthen the identity and ancestral memory of the Mura people in Porto Velho and riverside communities on the banks of the Madeira River; promote actions with the local community for the recognition of the “Indigenous way of being”; participate in the regional and national Indigenous movements struggling for social and environmental rights; strengthen creative and traditional production processes to ensure local income generation; and promote actions that contribute to coexistence in the Amazon biome and fight climate change.

Above design is by Naandeyeah and photos are by Mídia NINJA licensed under CC BY-NC 2.0.